Vietnam’s national women’s team seeks to earn a berth in the final round of the Asian Football Confederation (AFC) Women’s Cup by leading Group D in the qualifying round. 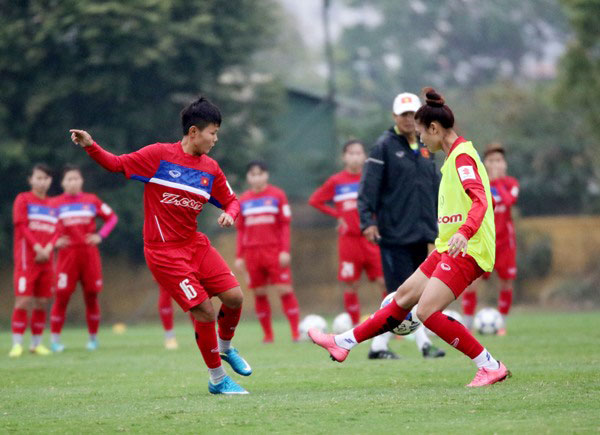 The Vietnam team during a training session to prepare for the AFC Women’s Asian Cup qualifying round. (Photo: vff.org.vn)

Vietnam will compete alongside Myanmar, Iran, Syria and Singapore in the group round, which will be held at the Vietnam Youth Football Training Centre in Hanoi next month.

In the latest FIFA rankings, Vietnam is ranked No. 32 in the world.

Meanwhile, Vietnam’s rivals, Iran, Syria and Singapore, are not listed in FIFA rankings because they did not play well in 2016.

Only Myanmar was ranked, reaching 43rd in the world.

“In group D, Vietnam will battle with strong rivals Myanmar and Iran. However, we will not be matched with Syria and Singapore,” said coach Mai Duc Chung.

“We will try our best to gain a slot on our home turf to play in the final round of the AFC tournament,” Chung added.

According to Chung, if Vietnam is focused and takes full advantage of opportunities, they can complete their goal.

Since early this month, the team began training for the tournament.

Chung brought together 26 players from five teams, including Ha Nam, Hanoi and HCM City, with veterans such as Nguyen Hai Hoa and Nguyen Thi Bich Thuy, along with youngsters such as Ha Thi Nhai, Nguyen Thi Thuy Hang and Do Thi Nguyen Hai.

“I am satisfied with my players’ training spirit. There is not much time for us, so we must focus on practice, physical strength and exercise,” said Chung.

Vietnam will play their first match against Syria on April 5. The other matches will be versus Singapore (April 7), Iran (April 9) and Myanmar (April 11).

The finals of the tournament, which will be held from April 7 to 22 next year in Jordan, will also serve as the Asian qualifiers for the FIFA Women’s World Cup France 2019.

The five best teams will book their tickets to Paris.

Three year ago, the finals were held in HCM City, though Vietnam failed to earn a ticket to the Canada 2015 World Cup after losing 1-2 to Thailand./.