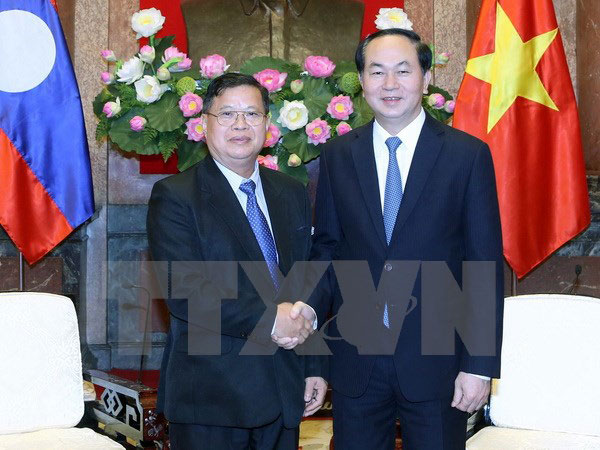 Vietnam considers the relationship an invaluable asset and a factor vital to the revolutionary causes of the two countries, the President noted.

He congratulated Laos on its outstanding assumption of the ASEAN Chair 2016, helping raise the country’s role and position in the world arena.

He also appreciated legislative achievements the neighbouring country has recorded over the recent past, including its ratification of the amended Constitution last December, which, he said, have contributed to consolidating the country’s legal system and spurring local socio-economic development.

Noting with pleasure fruitful cooperation between the two countries across fields, President Tran Dai Quang said such attainments are attributable to contributions of their legislative bodies.

He suggested the two agencies partner with each other to organise the two countries’ major events in the coming time, including the celebration of the 55th anniversary of the diplomatic ties (September 5).

At the same time, they should continue to join hands in the implementation of high-ranking cooperation agreements reached by the two countries, especially those sealed at the 38th meeting of the Vietnam-Laos Inter-governmental Committee in December last year, while increasing the exchange of experience, particularly in building institutions and laws, and supervising law enforcement, he said.

For his part, Somphan Phengkhammy reassured that the Lao NA will make every effort to mark the 40 years of the signing of the Vietnam-Laos Amity and Cooperation Treaty (July 18) and the 55th anniversary of the bilateral diplomatic relations, in a bid to help the two countries’ young generations understand more about the special solidarity and comprehensive cooperation.

The Lao legislator told his host that his visit aims to learn from experience in organisation and operation of Vietnamese People’s Councils at the city and provincial levels through pragmatic activities in the central provinces of Thanh Hoa and Nghe An./.