Thousands of people join blood donation festival in Can Tho

Thousands of people in the Mekong Delta city of Can Tho, including military officers and soldiers, youth union members and local residents, donated blood during the Blood Donation Festival on July 4 in response to the national blood donation campaign “Red Journey”. 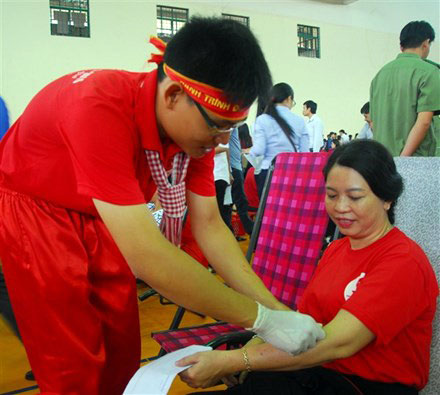 At the event (Photo: tienphong.vn)

“Red Journey” is a cross-country campaign initiated by the National Steering Committee for Voluntary Blood Donation and the National Institute of Haematology and Blood Transfusion in 2013, aiming to raise public awareness of the need for blood donation as well as thalassaemia, a genetic blood disorder that can lead to heart failure and liver problems.

Speaking at the event, chairwoman of the city’s Red Cross Huynh Thi Thanh Thao expressed her hope that the festival, entitled “Sac Do Tay Do” (Red Colour of Tay Do), will attract more people and spread information on genetic blood disorders and safe transfusion of blood.

Vice Chairman of the municipal People’s Committee Le Van Tam said Can Tho is among four localities in the country with more than 2 percent of population donating blood.

It is also one of the Southwest provinces that have the most effective network of blood donation clubs, effectively coordinating with local blood transfusion institutes and centres.

The city has received over 13,000 blood units in the first half of 2017, equivalent to 61 percent of the annual target.

It expects to collect about 1,100 blood units in the festival, surpassing the initial goal of 800 units./.