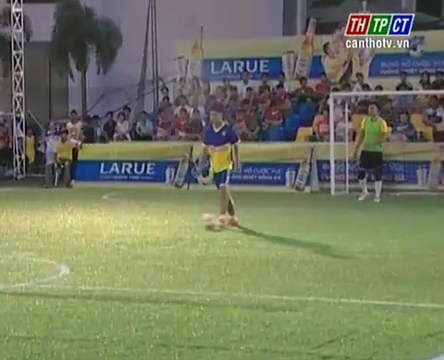 This is the 8th time Larue Beer has supported for Larue Cup football tournament. In this May, the tournament is held in 4 provinces, cities of Kontum, Quang Ngai, Cantho and Ca Mau. There are 24 teams of HCM, An Giang, Kien Giang, Hau Giang and Cantho in the western area competing in the tournament. With 12 players each team, the tournament applies the latest rule of 5 players on artificial grass court enacted by VN Football federation. Every match has 2 halves of 20 minutes with 5 minute break between the 2 halves and players can be freely changed. The teams compete in play- off matches for the most excellent teams to be awarded at the total value of as much as nearly VND 500 million. Audiences can also freely enjoy music programs performed by music stars from HCM city, HN capital and other interesting entertainment programs with nice gifts.

The tournament is held from May 22nd to 24th at the multi- functional competition house of Cantho city sports- gymnastics center.