Prime Minister Nguyen Xuan Phuc met with foreign diplomats in Vietnam attending the Conference on Sustainable and Climate-Resilient Development of the Mekong Delta in Can Tho city on September 27, calling for more support from foreign countries for the delta. 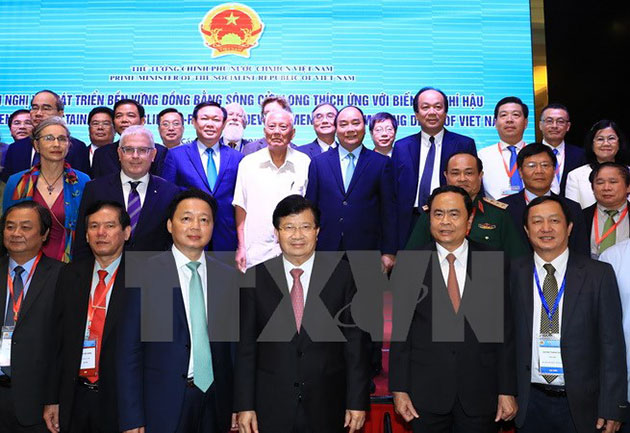 At a reception for German Ambassador Christian Berger, the leader said the diplomat’s attendance at the event demonstrates the German Government’s attention to sustainable development of the Mekong Delta.

The Vietnamese Government thanked the German Government for its effective cooperation and support, he said, adding that such German-assisted programmes have significantly contributed to Vietnam’s socio-economic development, particularly in vocational training, energy, environmental protection and climate change response.

The PM noted his hope that the German Government will continue its support to the Mekong Delta in development planning.

Vietnam always regards Germany as the country’s leading trust-worthy and important European partner, he said, urging the two sides to maintain regular meetings in order to enhance their mutual trust and deepen the bilateral ties across fields.

The diplomat expressed his wish that the Vietnamese and German Governments will continue scaling up their cooperation, looking towards a better future for the two countries’ people.

Christian Berger also said he hopes that pragmatic cooperation initiatives between Vietnam and other countries and development partners, including Germany, will be raised at the conference, helping to transform challenges posed by climate change into opportunities.

At a meeting with Australian Ambassador to Vietnam Craig Chittick, PM Phuc expressed his belief that the diplomat’s attendance at the conference will help advance collaboration between the two countries more practically and effectively.

Craig Chittick said Australia has rolled out many support and cooperation programmes in the Mekong Delta, noting that the Australian Government will continue its official development assistance (ODA) to Vietnam while mobilising resources for the country to develop the delta.

The Australian Government will also assist Vietnam in the spirit of innovative partnership, helping the country improve quality and productivity in agricultural production, he said.

Welcoming Swedish Ambassador Pereric Hogberg, PM Phuc called on the diplomat to do more for the cooperation between Vietnam and Sweden.

Pereric Hogberg said Sweden always heeds the development of the Mekong Delta. The Swedish Government has ratified a package worth more than 5 million USD to support the Mekong Delta Commission.

Meeting with Jun Yanagi, an envoy of the Japanese Embassy in Vietnam, the Vietnamese leader praised Japan’s assistance to the development of the Mekong Delta.

Vietnam attaches importance to developing its relationship with Japan in the spirit of the extensive strategic partnership, for peace and prosperity in Asia, he said.

The host urged the two sides to closely coordinate with each other in preparing the visit to Vietnam by Prime Minister Shinzo Abe to attend the APEC Economic Leaders’ Week slated for November.

Jun Yanagi lauded PM Phuc’s initiatives to organise the conference in order to mobilize all resources for the development of the climate change-hit delta, emphasising that climate change response is one of the main pillars of Japan-Vietnam cooperation./.