The northern province of Phu Tho on March 21 received a certificate recognizing the Mother Au Co worship as part of the national intangible cultural heritage. 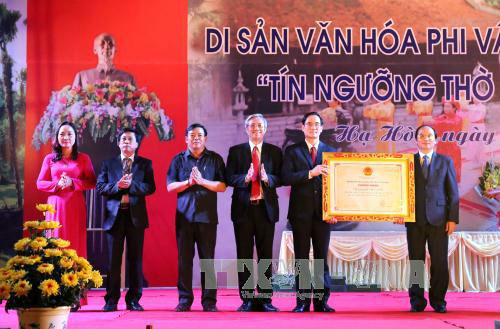 At the ceremony presenting the certificate (Source: VNA)

Measures are needed to protect the heritage space, upgrade and manage the Mother Au Co Temple site, he said, calling for an action plan to ensure the continuity of the ritual in the current life.

The Mother Au Co Temple Festival takes place from the seventh to the ninth day of the first lunar month.

The temple was built under the reign of King Le Thanh Tong (15th century) and named a national historical and cultural relic site in 1991.

Legend has it that Au Co, who was a fairy, descended to the earth on the seventh day of the first lunar month.

She met with Lac Long Quan and gave birth to 100 sons.

When they arrived in the area which is now Hien Luong commune, Au Co and her children were so captivated by the area’s fertility and stunning landscapes that they decided to settle there, and this was where the eldest son was crowned as King Hung – the legendary founder of Vietnam.

They practised water rice cultivation to provide food, planted mulberry trees, and bred silk worms before Au Co returned to heaven on the 25th day of the twelfth lunar month.

Vietnam has about 8,000 festivals each year. Of which, nearly 90 percent are traditional festivals, 6 percent are religious ones and 4 percent are historical ones./.