Minimum wage to go up 17 percent

The Vietnam General Confederation of Labor (VGLC) has submitted plans to increase the minimum wage by 16-17 percent in 2016 to the National Salary Council. 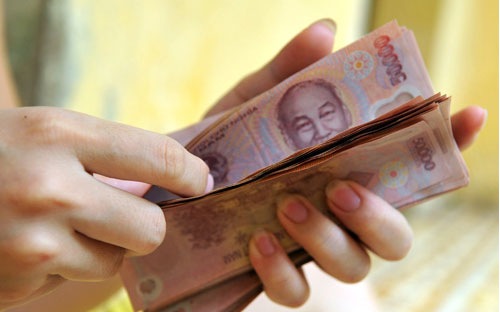 Zone 1 covers urban Hanoi and HCM City; Zone 2 covers rural Hanoi and HCM City along with urban Can Tho, Da Nang and Hai Phong cities; Zone 3 applies to provincial cities and the districts of Bac Ninh province, Bac Giang, Hai Duong, and Vinh Phuc provinces; and Zone 4 takes care of the remaining localities. The salary hike is expected to meet only 86 to 88 percent of minimum acceptable living conditions.

The 2014 Law on Social Insurance stipulates that salaries be based on whether employees include social insurance premium in pay, give allowances or provide other supplements. Therefore, in deciding the new minimum wage, VGLC took into consideration these other factors that might have significant impacts on enterprises’ expenditures.

Nevertheless, VGLC stated that the hike must be sufficient to both cover the slippage in product prices (about 5 percent per year) and match the annual 3-3.5 percent increase of labour productivity in order to improve labourers’ livelihoods.

“In other words, minimum wage increases must satisfy labourers’ basic living standards whilst allowing enterprises to compete in a period of integration, and to expand production and create more jobs,” Loi added.

Nguyen Thi Thanh, a worker at the Bac Thang Long Industrial Park in Dong Anh district, Hanoi, however, felt the wage increases still fail to provide for her basic needs.

A recent survey by VGLC showed that the pay labourers receive this year rose by 14.75 percent due to a minimum wage hike. The minimum wage, however, does not meet minimum living standards.

The international conference on sustainable ocean economy and climate change…