Micro-camera can be injected with a syringe

German engineers have created a camera no bigger than a grain of salt that could change the future of health imaging—and clandestine surveillance. 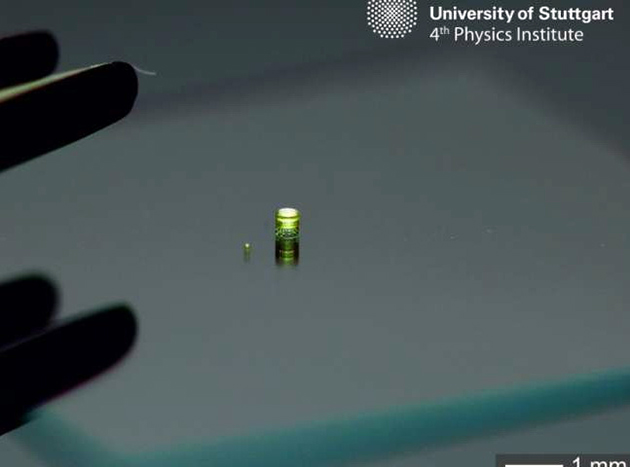 Using 3-D printing, researchers from the University of Stuttgart built a three-lens camera, and fit it onto the end of an optical fibre the width of two hairs.

Such technology could be used as minimally-intrusive endoscopes for exploring inside the human body, the engineers reported in the journal Nature Photonics.

It could also be deployed in virtually invisible security monitors, or mini-robots with “autonomous vision”.

3-D printing—also known as additive manufacturing—makes three-dimensional objects by depositing layer after layer of materials such as plastic, metal or ceramic.

Due to manufacturing limitations, lenses cannot currently be made small enough for key uses in the medical field, said the team, which believe its 3-D printing method may represent “a paradigm shift”.

It took only a few hours to design, manufacture and test the tiny eye, which yielded “high optical performances and tremendous compactness,” the researchers reported.

It can focus on images from a distance of 3.0 mm, and relay them over the length of a 1.7-metre (5.6-foot) optical fibre to which it is attached.

The “imaging system” fits comfortably inside a standard syringe needle, said the team, allowing for delivery into a human organ, or even the brain.

“Endoscopic applications will allow for non-invasive and non-destructive examination of small objects in the medical as well as the industrial sector,” they wrote.

The compound lense can also be printed onto image sensor other than optical fibres, such as those used in digital cameras.

The 1ˢᵗ scientific workshop of the ministerial scientific and technological program