Hoa Lu Festival, the national cultural heritage in the northern province of Ninh Binh, kicked off on April 5, or the 9th day of the third lunar month. 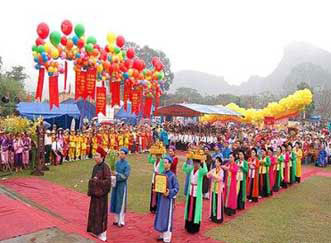 Among the highlights of the festival is a water-carrying procession from the Hoang Long River to the King Dinh temple in the early morning of the same day.

The established ritual aims to remember the services of Dinh Bo Linh, the first Vietnamese emperor following the liberation of the country from the rule of the Chinese southern Han Dynasty and the founder of the Dinh Dynasty and a significant figure in the establishment of Vietnamese independence and political unity in the 10th century.

During the three-day festival, there will be many other cultural and sport activities, including a requiem, a temple gate-opening ceremony, and displays of coloured lanterns and flower garlands, and performance of folk games.

The festival contributes to preserving and upholding the country’s traditional cultural values, and promoting the locality’s tourism potential and strengths as well.