With a breathtaking natural landscape rich in cultural and historical treasures, Dong Thap province is set to become a tourism hot-spot.

Dong Thap has long been known for its spectacular natural landscapes and scenic rivers with traits of the wild wetlands of Dong Thap Muoi. The province has numerous sites of interest, with many of its tourist attractions centred around its waters.

As such, the province holds great potential as a unique and diverse tourism destination.

Dong Thap province is home to three national parks: Tram Chim, Xeo Quyt and Go Thap. Spread over an area of 7,500 hectares in Tam Nong district, the Tram Chim National Park is a miniature version of the Dong Thap Muoi region, featuring a broad and diverse range of animals and plants indigenous to southern Vietnam.

A quarter of the total bird population of Vietnam can be found in Tram Chim, with 200 different species. Many of these are protected and are listed in the IUCN Red List of threatened species.

The most common of these and most well-known is the red-crown crane, one of the last fifteen crane species in the world.

Xeo Quyt ecological zone is another highlight of the province. Xeo Quyt is famous for its cajuput forest, containing more than 170 species of flora and 200 species of animals. Thirteen of these animal species are named on the Red List.

Travelling to the cajuput forest during the flooding reason, visitors glide on sampan amongst the yellow cajuput trunks, breathing the cold wet air fragrant with flowers and cajuput resin, the sounds of the forest echoing around them. 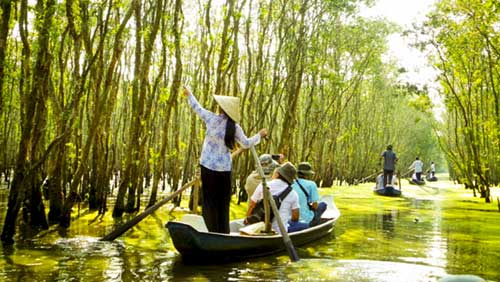 Furthermore, the area is set for preservation as a revolutionary relic so visitors can experience recreated scenes of defence and hardship from the time of war. Hiding places from this period remain, including underground houses, stores and secret tunnels.

After exploring the ecological parks, Go Thap archaeological site is the ideal stop for history lovers. Existing as a special national relic in Thap Muoi district since 2012, it comprises a 290 hectares of lotus fields, wetlands and cajuput forest.

Archaeologists have found a number of cultural artifacts of the Oc Eo Culture, including residential, burial and architectural sites, which date back 1,500 years. The Go Thap site was an important revolutionary base during Vietnam’s resistance wars against France and the US.

The site is well-known for its annual festivals, one at Ba Chua Xu pagoda and one to commemorate the hero Thien Ho Duong. These events attract thousands of visitors.

Tourism developments in Dong Thap province aim not only to promote and protect the natural landscape, but also to improve the image of local communities. It is hoped that local residents can bring their own special strengths to the tourism industry.

One of the prime attractions of the area are the numerous lotus fields, earning the province its moniker ‘Dong Thap as pure as the soul of lotus.’ The lotus field in My Hoa and Tan Kieu districts attract thousands of tourists seeking peace and serenity at weekends.

Visitors can explore five lotus farms, where fields of pink and white lotus glow in the sunshine. For the farmers here, the lotus not only provide a source of income, but also enable them to show their pride in the beauty of their native land.

The local authority have further plans to develop the lotus fiends as a resort area. The Thap Muoi lotus resort will comprise an area of 150 hectares, aiming to provide diverse local tourism products and preserve the environmental resources through sustainable tourism. 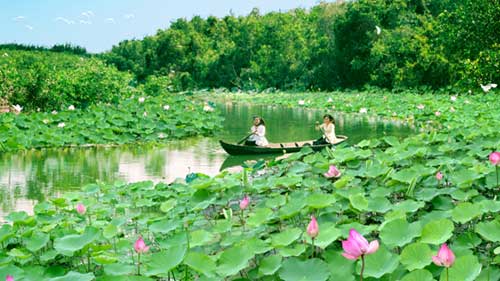 According to the Dong Thap Department of Culture, Sports and Tourism, the first six months of 2015 saw 1.3 million visitors to the province, an increase of 50% from the previous year. 27,000 of these were international tourists.

This growth indicates that positive steps are being made in the development of the tourism industry in Dong Thap.

Whilst establishing itself as a strong tourism destination, Dong Thap province recently showcased its potential at the Southern Lotus festival in Ho Chi Minh City and the Green Mekong tourism week at Can Tho City.

Tourists and travel agencies enjoyed the special treasures of the province through its Lotus Voyage-a unique trip highlighting the beauty of its rivers.

Furthermore, the province is also working with travel agencies to improve its roads and water routes, connecting the province with other Mekong river provinces as well as Cambodia.

Moreover, steps are being taken to develop and promote the unique tourism products of Dong Thap, including seasonal eco-tourism, river tourism, village visits and culinary experiences.