Deputy Prime Minister Trinh Dinh Dung urged the local authorities of the Mekong Delta region to respond in time to protect the lives and properties of residents in erosion-prone areas while conducting an inspection tour of U Minh district of Ca Mau province on May 29. 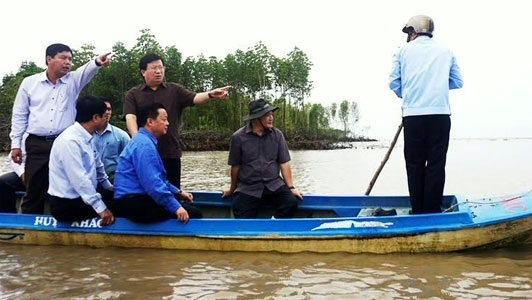 The Deputy PM criticised that planning for prevention of coastal erosion in the region has not been done seriously.

Therefore, he noted the regional localities must strengthen erosion areas, keep the protective forests safe and take measures to deal with areas prone to erosion.

The official requested the central-level agencies to complete the study on prevention of erosion and promote the application of science and technology in this area.

He highlighted the significance of the region for the country’s economic growth while mentioning the radical climate change that has occurred in the region.

The Ministry of Agriculture and Rural Development pointed out that very close proximity of constructed houses, infrastructure and dykes to the coastline has increased the risk of coastal erosion.

According to the ministry, sea erosion in several areas has threatened the safety of residential quarters and natural disaster prevention projects, wiped out coastal protective forests and seriously impacted the eco-system.

Based on scientific study and management, the ministry revealed seven basic reasons for coastal erosion, the majority of which are caused by humans.

One of the reasons is the declining level of mud and sand due to reservoirs being built on the upper part of the river and sand and gravel exploitation at the riverbed.

Another reason is the deforestation of mangrove swamps to catch seafood and find forest-related aquatic products.

Land depression due to overexploitation of underground water to raise aquatic products has occurred in Bac Lieu and Ca Mau.

The level of land depression has been recorded at 3cm per year, according to a report of the Geological Institute of Norway.

The Government and the National Committee on Climate Change have launched projects and programmes to improve the Mekong Delta region’s capacity to adapt to climate change.

The actions include a project on protection and development of coastal mangrove forests to adapt to climate change during the 2014-2020 period, focusing on mangrove forest recovery.

The money disbursed for the region to protect and recover forests in the 2016-2020 period is estimated to reach more than 4.4 trillion VND (196 million USD), making up some 40 percent of total disbursement for all localities./.