Dengue fever on the rise in Mekong Delta

Dengue fever cases in the Mekong Delta increased by 125 percent in the first 15 days of July 2017 compared with the same period last year. 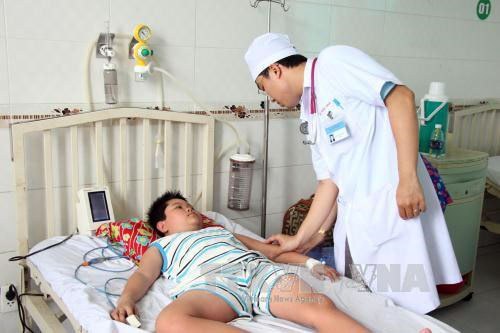 A dengue patient at Can Tho Paediatrics Hospital (Source: VNA)

An Giang province alone recorded the highest number of 120 hospitalised cases in the first ten days of this month, followed by Soc Trang province with 110 cases and Dong Thap province, 100 cases.

Statistics show that Can Tho Paediatrics Hospital treated 1,290 cases of dengue fever so far this year, up 23.68 percent year-on-year.

Of them, 450 patients hail from Can Tho city, with the remainder from 12 cities and provinces in the Mekong Delta.

During the first half of July, the hospital treated 165 dengue patients, a rise of 125 percent against the corresponding time last year.

Since the beginning of this year, dengue-related deaths have been reported in Dong Thap, Tien Giang and Tra Vinh provinces.

Notable, dengue fever has increased sharply this year among children aged between 10-15 in the Mekong Delta, especially in Can Tho city.

According to Bui Hung Viet, head of the Dengue Fever Department of Can Tho Paediatrics Hospital, the boom in infections is due to weather conditions in the early rainy season, which are favourable for the development of mosquitoes.

He added that dengue fever was previously recorded only in the rainy season.

However, he said, it now occurs year-round due to climate change and out-of -season rains.

Dengue fever is transmitted by mosquitoes carrying the virus.

Its symptoms include high fever, headaches and joint aches, which can be confused with symptoms of other diseases.

The disease has potentially dangerous complications such as shock, respiratory failure, coagulation, liver damage and altered mental status, and can be fatal.

According to the World Health Organisation, dengue is spreading in many countries worldwide.

Each year, worldwide, about 20 million people contract dengue and some 500,000 are hospitalised./.