The Central Highlands province of Dak Nong is surveying the volcanic cave system in Krong No district to compile a dossier seeking UNESCO’s recognition as a global geopark. 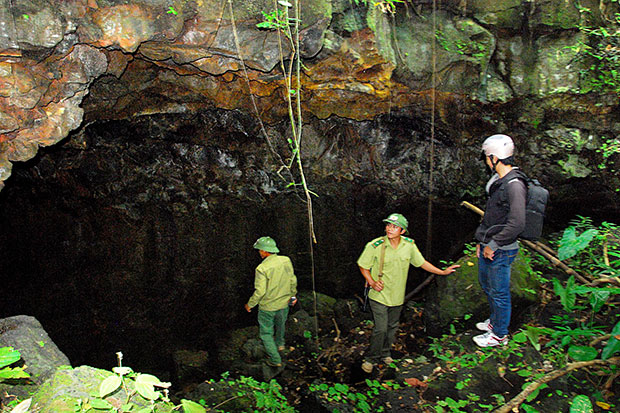 Forest rangers stand in front of the mouth of a cave in the Krong No volcanic cave system (Photo: VNA)

The Krong No volcanic cave system, discovered by Japanese scientists in 2014, is located in the special-use forest of Dray Sap, along the Serepok River from Buon Choah commune to Dray Sap Waterfall.

It consists of a number of caves with various sizes and shapes.

Scientists have studied three caves, including one that is more than 1km long and believed to be the biggest lava cave in Southeast Asia.

With a view to raising public awareness of managing and preserving its geological values, the management board for the Krong No volcanic cave geopark and the Vietnam National Museum of Nature opened a training course in the district on November 30.

It targets local officials and residents who will directly manage and protect the cave system./.