Con Dao Islands home to turtles, crabs and a multitude of sea life

With their pristine seas, the Con Dao Islands are home to a large number of sea turtles. Every year, between April and November, their breeding season, thousands of turtles crawl ashore to lay eggs in the sand, providing a fascinating experience for visitors to the beautiful island.

It took us nearly one hour to travel to Bay Canh Island from Con Son Island by boat. It was nearly 4pm, and the tide had already ebbed away, leaving behind rugged rock-tops emerging above the transparent water.

After the boat had anchored by the Bo Dap beach, some visitors scuba dived while others transported the luggage and food to the canoe to continue moving onwards to the Con Dao National Park.

As soon as our canoe reached the park, we were warmly welcomed by a forest warden who carefully helped us to step ashore.

The two sides of the small path leading to the park were covered with thick mangrove forests which looked so primitive and seemed to offer no access to humans. At times, there were pleasing sounds made by small insects from nearby trees.

It had started to get dark, and the winds got stronger, imbued with the taste of the sea. There was no electricity, and the only light we had came from our tiny electric torches and the moon shining above.

Leading us around thousands of sea turtles’ nests, Le Hong Doan, the head of the forest management on Bay Canh Island, said, “Sea turtles often lay about 100 eggs at a time, each of which will take from 45 to 60 days to hatch.”

He pointed at the holes marked with boards, from which hundreds of tiny sea turtles were crawling out.

“They can return to the sea tonight,” he continued.

If tortoises can protect themselves by retracting their head into their shell, sea turtles can only try to swim as fast as they can to escape from their enemies. In addition, they are also frightened by light and noise, so only after dark and after the tide has risen will they start to find a place to lay eggs. 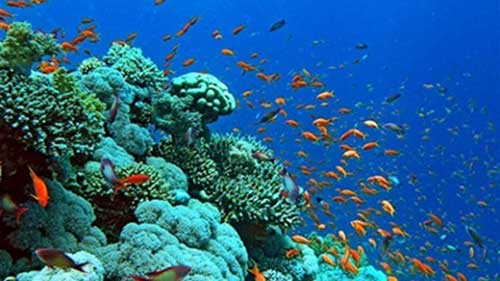 Therefore, after finishing dinner prepared by the forest wardens, we were led to the mangrove forest to see the blue land crab, a rare kind of crab in Vietnam. Like sea turtles, they are also afraid of humans, so they instantly hide on hearing approaching human steps.

After half an hour of seeking out crabs unsuccessfully, we had to give up and lie on the hammocks, waiting till midnight when the sea turtles started to lay eggs.

Holding a 1kg crab which kept wriggling in his hands, he said, “Blue land crabs crawl fast and hide very carefully. So it is very difficult to find them. The number of these kinds of crabs is very small, therefore we are building a plan to preserve them in the future.”

After seeing the rare crabs, everybody moved to the beach to wait for the turtles. It was nearly 11pm but there seemed no trace of any commotion that crabs create. The sea at night was so silent, except for the sounds of the waves that sometimes struck ashore.

At about 12pm, by following the big footprints in the sand, we approached the position where a turtle was digging a hole to prepare to lay eggs.

“She is making a very deep hole to protect her eggs,” explained the forest warden while shining his electric torch at the back of the turtle.

Shortly afterwards, each tiny egg, as small as a ping-pong ball, started to fall into the hole. Everyone was very excited and curious to see such a rare and interesting scene. The result of that night was 87 eggs laid by the 200kg sea turtle.

After giving birth successfully, the mother turtle quickly used her two rear legs to cover the hole with sand and moved to the sea.

Noting down the details about the size the mother turtle’s shell, the forest warden started to dig the hole in which the turtle had just given birth to check the quality of the eggs.

“This mother turtle laid fewer eggs than usual, because each turtle is expected to have more than 100 eggs, 80 or 85% of which will be hatchable,” he said, while quickly moving the eggs into a net.

The eggs looked so cute that we could not resist asking for the forest warden’s permission to hold and gaze at them in our hands.

He also enthusiastically showed us how to examine the eggs properly and provided us with important information about two popular kinds of sea turtles in the area.

According to the board of management of Con Dao National Park, the eggs are moved to a higher position in order to prevent sea water from spoiling them. Additionally, the direct interference of the hatching temperature will decide the sex of the baby turtles, which helps in balancing the male to female ratio.

The movement also plays a very important role in preserving such precious sea animals, whose babies only have 1/1,000 or even 1/10,000 chance of survival.

Not only learning about the process of giving birth and development of sea turtles, we also had a chance to release the baby turtles into the sea ourselves.

Three of us held a basket which contained hundreds of baby turtles and moved towards the sea. As soon as they landed on the sand, the turtles immediately swam away in the silent night, riding along the white frothy sea waves.

What an interesting lesson we had learnt about nature, precious sea animals’ preservation and environment protection.