Can Tho wants to work with Canada in hi-tech agriculture

Secretary of the Can Tho city Party Committee Tran Quoc Trung has called on Canadian firms to invest in hi-tech agriculture in the city. 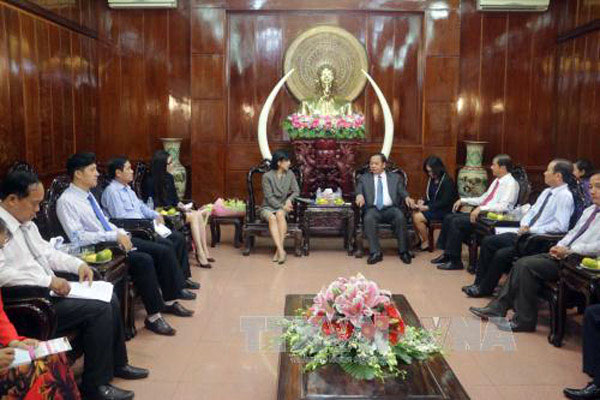 At the reception (Source: VNA)

He met with Canadian Ambassador to Vietnam Ping Kitnikone on March 14, saying the city is working on the planning of three hi-tech agricultural production areas for submission to the Government for approval.

Hi-tech agriculture will help the city improve the quality and value of its agricultural exports while bettering its adaptation to increasing climate change impacts, such as salt water intrusion, landslides and fresh water shortages in the Mekong Delta region, Mr. Trung added.

He also expressed his hope that Canadian firms will explore investment opportunities in manufacturing farming machines given the city is the nation’s biggest hub of producing and exporting farm products.

The city also wants to join hands with Canadian companies to develop high added-value export product chains and in information and communication technology, and education and training.

Addressing the event, the Ambassador said in 2016, the bilateral trade value between the two nations hit 5 billion USD, of which a majority of goods shipped from Vietnam to Canada is agricultural and fishery products.

Canadian wants to explore further the city’s hi-tech agriculture potential to expand their market and products.

The country wants to connect with multiple nations in the Asian – Pacific region, the diplomat noted./.