Can Tho asked to work to step up regional connectivity

National Assembly Vice Chairman Phung Quoc Hien has stressed the need for the Mekong Delta city of Can Tho to be a pioneer in boosting regional connectivity. 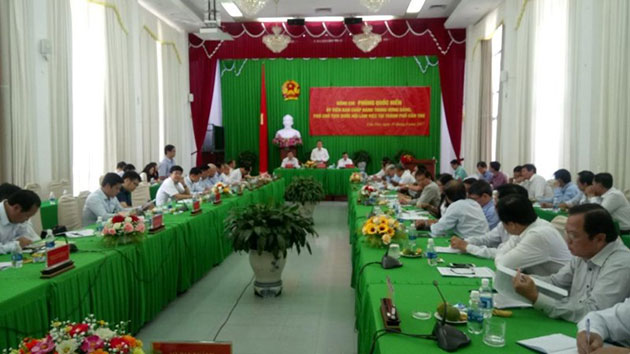 An overview of the working session (Source: plo.vn)

Connectivity should focus on not only the economy but also culture and transport, Hien told municipal leaders at a working session in the locality on August 31.

As the centre of the Mekong Delta region, Can Tho needs to develop high technology, attract more investment in agriculture and industry and actively respond to climate change, he added.

According to Vice Chairman of the municipal People’s Committee Dao Anh Dung, in the first eight months of 2017, the city’s industrial production value increased by 6.87 percent year-on-year, while the rate of poor households fell 1 percent.

At present, 26 out of 36 communes meet new-style rural area requirements.

He proposed the NA, Government and ministries prioritise State funds to implement inter-regional public private partnership (PPP) projects, and soon carry out a master plan the preventing landslides on river banks in the Mekong Delta region.

In 2017, the city targets economic growth of 7.8 percent and per capita income of 72.6 million VND. Its export turnover is expected to hit 1.67 billion USD, a year-on-year increase of 7.5 percent.