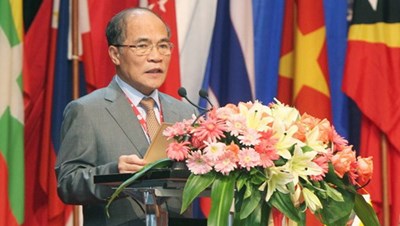 ASEAN is entering a critical period of finalizing the goal of building an ASEAN Community by 2015 and the ASEAN Inter-Parliamentary (AIPA) becomes an important support mechanism for the regional grouping, has said National Assembly (NA) Chairman Nguyen Sinh Hung.

The Vietnamese top legislator was speaking at the first plenary session of the 35th General Assembly of the ASEAN Inter-Parliamentary (AIPA-35) in Vientiane, Laos on September 16.

In his speech, Hung said ASEAN is actively preparing for the post 2015 development period to bring into full play what the regional bloc has achieved in the process of implementing a roadmap for building the ASEAN Community and strengthening political and economic connectivity and sharing social responsibility.

“Vietnam welcomes the results recorded at the 24th ASEAN Summit, the 47th ASEAN Ministerial Meeting (AMM-47) and related meetings in recent years that contributed to the maintenance of peace, stability and security at sea and in land, freedom of navigation and aviation in the East Sea and show partners’ determination to prevent tensions.” Hung said.

Over the years, AIPA has enhanced cooperation to support member countries’ governments in implementing the goal of building the ASEAN Community.

NA Chairman Hung hailed AIPA’s effective operation as a demonstration of high sense of responsibility of each member. To date, AIPA has become ASEAN’s important support mechanism based on three major pillars:  politics-security, economics and culture-society.

The Vietnamese lawmaker suggested AIPA should continue offering the best possible conditions for ASEAN member countries to implement the remaining work through harmonizing law and stepping up legislation and supervision cooperation among AIPA members.

NA Chairman Hung spoke highly of AIPA-35 President’s speech which, he said, highlighted the mission of AIPA in promoting the development of the ASEAN Community.

He also reiterated Vietnam’s resolve to make practical and effective contributions to enhancing the role of AIPA in building and developing an ASEAN Community of peace, stability, cooperation and prosperity and he wished AIPA-35 will make a great success.

During the first plenary session, the heads of AIPA delegations voiced their support for the theme “Strengthening parliamentary cooperation within the ASEAN Community”, and adopted the agenda for AIPA-35, as well as the membership of committees and topics of dialogues./.

US Treasury Secretary calls for increased ODA for Vietnam