Vietnam beat hosts Bahrain 1-0 in the quarterfinals of the Asian Football Confederation (AFC) Under-19 Football Championship to reach the semifinals, securing a berth at the FIFA U-20 World Cup. 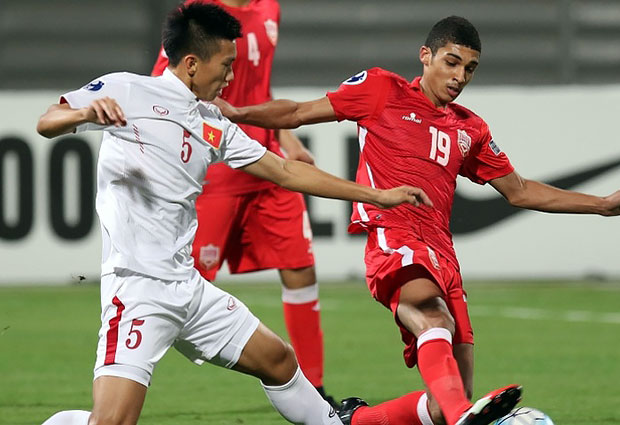 Defender Doan Van Hau of Vietnam’s U19 team (5) vies for the ball with a Bahraini player in a quarterfinal game in which Vietnam won 1-0. (Source: AFC)

Bahrain dominated the first half but squandered several chances.

Vietnam upped their game in the second half, producing some good opportunities before Thanh scored.

The win marked a historic double for the U19 team by reaching the semifinals of an AFC football competition for the first time and by qualifying for the FIFA U-20 World Cup, which will take place in the Republic of Korea in 2017, for the first time.

Vietnam will face either Japan or Tajikistan in the last four, with the two sides meeting in the quarterfinals on October 24.

Earlier, in the group stage, Vietnam beat the Democratic People’s Republic of Korea 2-1 and drew with the United Arab Emirates and Iraq, grabbing five points and second place in Group B.

“What can I say? The victory is extraordinary and I’m so happy and proud of what our players displayed,” Vietnam’s U19 team head coach Hoang Anh Tuan said in a post-match interview.

“In modern football, strategy is the most important thing and we searched for every bit of information on Bahrain to break them down. I know that Bahrain’s problems lie in fitness and after around 70 minutes, they often lose strength and make mistakes, this was the time for us to attack and look for goals. Everything happened exactly that way.

“This is the result of long-term preparation, not just 90 minutes on the pitch.

To build a team with resilience and concentration, a lot of time is needed. Fighting spirit is our advantage. Everyone saw how much our players put into the game,” Tuan said.

FIFA immediately sent congratulations to the U19 Vietnam./.