The Ministry of Culture, Sports and Tourism has recognised “Zeng” weaving in A Luoi district, the central province of Thua Thien – Hue as a national intangible cultural heritage. 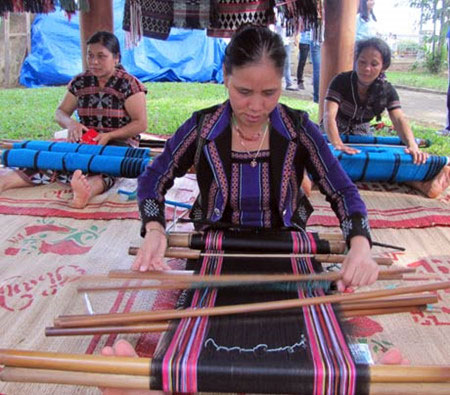 “Zeng” weaving is a traditional craft at A Luoi district (Source: VOV)

The information was revealed by Director of the pronvicial Department of Culture, Sports and Tourism Phan Tien Dung.

Head of the culture and information department in A Luoi district Le Thi Them said “Zeng” weaving is a traditional craft of Ta Oi ethnic people. “Zeng” textile is indispensible in important events, creating a unique feature of Ta Oi people in particular and the ethnic community in A Luoi in general.

The craft has been preserved through many generations, she said, adding that women play a significant role in teaching their daughters to weave “Zeng” patterns.

In marriage, a bride should know how to make beautiful “Zeng” items to present to her husband’s family members.

Mai Thi Hop, owner of a “Zeng” weaving facility in A Luoi, said diverse “Zeng” products have become popular for visitors to the district./.