A week themed “Great National Unity – Vietnam’s Cultural Heritage” kicked off at the Vietnam National Village for Ethnic Culture and Tourism in Hanoi on November 18. 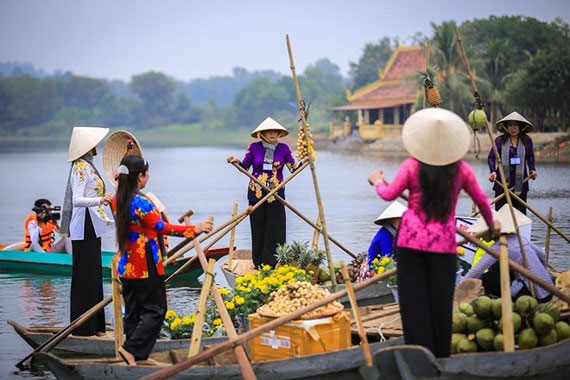 A highlight of the “Great National Unity – Vietnam’s Cultural Heritage” Week is the re-enactment of the culture of Cai Rang floating market (Photo: VNA)

A highlight of the week, which lasts until November 23, is the re-enactment of the culture of Cai Rang floating market, which is part of the national intangible cultural heritage.

The re-enactment of Cai Rang market’s culture will include performances of the art of “Don ca tai tu” music and song, named in UNESCO’s Representative List of Intangible Cultural Heritage of Humanity.

Various activities will be held as part of the week such as ethnic groups’ exchanges, a workshop on developing the Vietnam National Village for Ethnic Culture and Tourism, and the inauguration of phase I of Phap An Pagoda in the village.

At the opening ceremony, Chairman of the Vietnam Fatherland Front Central Committee Tran Thanh Man said the great national unity bloc is always the most important and strongest resource for the whole Party, people and army to weather every difficulty and challenge to succeed in reform and national development.

Great unity is also one of the most precious cultural values of the Vietnamese people, he noted, calling on people from all social strata to join hands to bring into play the strength of the great national unity bloc.

Over 50 cases of not wearing masks at public places punished

Nominees of the constituency No.6 met voters in Thới An ward