Viettel launched its 4G service in Hanoi on April 18 in the presence of Deputy Prime Minister Vu Duc Dam, who asked the military-run telecommunication group to seek measures to give people free access to information of Party and State agencies as well as major media agencies. 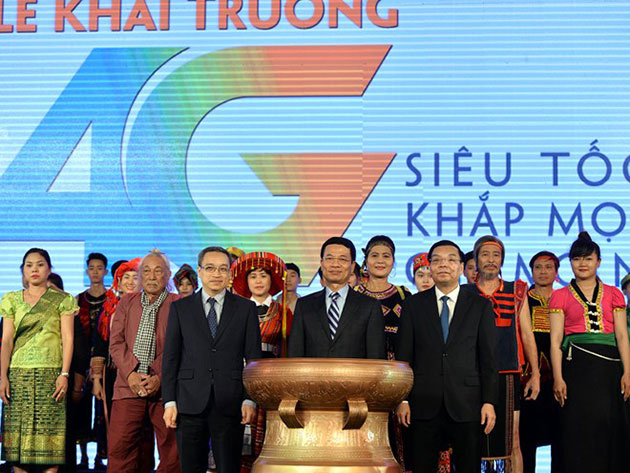 At the launching ceremony of Viettel’s 4G services. (Source: VNA)

The Deputy PM lauded Viettel’s efforts, determination and creativeness to contribute to the growth of Vietnam’s information technology development.

Only after six months, Viettel has succeeded in putting the 4G service in the international scale, he noted.

However, that despite recent strong growth, Vietnam’s information and communication technology sector is still far behind the world, which requires the sector to make outbreak steps to boost the growth of the sector, thus tapping opportunities brought by the fourth industrial revolution, he stated.

Deputy PM Dam held that Viettel’s pioneer in providing first 4G service in Vietnam is a specific action to realise its commitments, but the group should ensure the quality of the service to optimise the interest of users.

He encouraged Viettel Group to continue focusing on researching and producing IT devices, meeting domestic demand and striving to export.

The Deputy PM also called on major telecommunication service providers of Vietnam to join hands in supporting businesses, especially micro-small and small enterprises as well as startup firms in terms of IT at a low cost.

With 4G, customers can enjoy speeds that are 7 to 10 times higher than 3G. Earlier, Viettel Telecom – a subsidiary of Viettel provided free 4G SIM cards to its users ahead of the launch of its 4G network./.