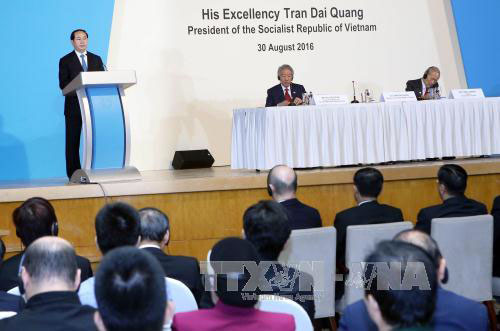 Some 550 leaders, politicians, cabinet members, professors, scholars and academics listened to the speech by President, who is the first Vietnamese leader who attended and addressed Singapore Lecture.

In his speech, the leader stated that peace, stability and cooperation for development have become an inevitable demand of all nations and a major trend in today’s world.

“The seriousness of these challenges is extremely worrying as long as the ‘might makes right’ mindset and the resort to the use of force still exist,” the President emphasised.

He said the Asia-Pacific, including Southeast Asia, continues to be a dynamic development hub with a growing geo-strategic, economic and political importance in today’s world, and the East Sea not only brings about many important benefits to nations in the region but is also a vital route for maritime and air transport of the world.

The entire region is exerting its best efforts to rise, he affirmed, pointing to recent worrying developments in the region and the East Sea as having had negative impacts on the security environment of the region, especially maritime security and safety, freedom of navigation and overflight, threatening to erode trust and affecting the cooperation process of the region.

“Should we allow instability to take place, especially in the case of armed conflicts, there will be neither winner nor loser, but rather all will lose,” he stated.

The Vietnamese leader spoke of the passionate desire for peace, security and sustainable development in the region, calling for all nations to stand united, act together and promote cooperation on the basis of international law, equality and mutual interest. He quoted the late Prime Minister of Singapore Lee Kwan Yew as saying that “you are not just making promises or pleasantries, you mean what you say”.

Regarding ASEAN, he said with a vision beyond its own interests, the bloc has been expressing its voice, ever stronger and more responsible, over the common concerns of the international and regional community, and has been very successful in drawing the strategic engagement of major powers in the common interest of peace, stability, sustainable development in the region and the world over.

“A multipolar, multi-layered regional architecture in which ASEAN plays a central role is conducive to and can satisfy the interests of all parties,” he said.

To maintain peace and stability, promote cooperation and fortify itself in the face of hardships and challenges, ASEAN should strengthen political coherence, promote economic and cultural-social integration, uphold the responsibility and the awareness of a shared destiny, and steady the aim of an ASEAN of the people, he stressed.
Turning to Vietnam, he asserted that solidarity, including international solidarity is a valuable tradition and major lesson that have helped the Vietnamese people rise from the yoke of oppression, ruin, poverty and backwardness in the 20 th century.

After thirty years of reform, Vietnam has overcome social and economic crisis and the state of underdevelopment, but still faced such challenges and difficulties as a developing yet unstable economy, mounting public debt, unbalanced human resource structure, and low workforce quality, he reminded.

“In that situation, we have been continuing to uphold the spirit of patriotism, make use of all resources and the creativity of the people while strengthening comprehensive reform so as to speed up national development in a sustainable way,” he stressed.

Regarding the East Sea issue, the Vietnamese leader reiterated the consistent position to remain resolute and persistent in the defense of national independence, sovereignty and territorial unity and integrity.

“We seek to settle disputes by peaceful means through the political, diplomatic and legal process on the basis of international law, including the 1982 United Nations Convention on the Law of the Sea,” he noted.

The President also noted the admirable development of Singapore over the last fifty-one years as a valuable lesson for Vietnam in its national construction and defense.

“We hold in high regards and pay great attention to learning from Singapore’s successes in the planning and implementation of the policy prioritizing investments in science and technology and education and training, in making use of training and the use of high-quality workforce to rapidly and sustainably develop your nation.”

Vietnam wishes to work together with Singapore to promote and further deepen the Strategic Partnership across all areas, centered around economic, trade, investment, defense, security and maritime cooperation and cooperation at regional and international forums.

After the speech, President Tran Dai Quang fielded questions raised by researchers and academicians on measures to enhance ASEAN’s role and voice together with orientations to bolster Vietnam-Singapore ties across politics, economics, trade, and people-to-people exchanges.

The Institute of Southeast Asian Studies (ISEAS) – Yusof Ishak Institute was established under a parliamentary act in 1968, and has grown into a leading research institute in the fields of economics, security, and socio-political issues in Southeast Asia.