Vietnamese film director Nguyen Hoang Diep has been awarded the title of “Knight of Arts and Letters” by the French Government, making her the first Vietnamese female director to win the accolade. 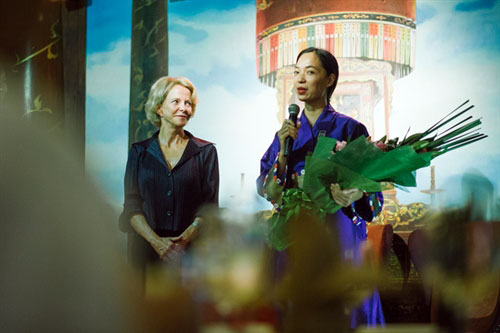 French National Cinema Centre President Fédérique Bredin presented the title to Diep at a ceremony held in Hanoi on September 5 on the occasion of French President Francois Hollande’s official visit to Vietnam.

Diep is the second Vietnamese filmmaker to be awarded this title after documentary filmmaker Le Manh Thich.

Diep was conferred with the title following the success of her first motion picture titled Dap Canh Giua Khong Trung (Flapping in the Middle of Nowhere). The 99-minute movie has been screened and won many prizes at domestic and international film festivals.

The movie has been screened at domestic and international film festivals and has won several prizes.

Born in 1982, Diep is a graduate of the Theatre and Cinema College.

The “Knight of Arts and Letters” title was established in 1957 by the French minister of culture, and its national merit status was confirmed by French President Charles de Gaulle in 1963.

The title is bestowed upon people in recognition of their outstanding achievements or great contributions to the art and literature of France and the world./.