Since exports of dragon fruit, mainly through the border with China, are volatile, farmers want the fruit to be promoted in the local market, heard a conference held by the Ministry of Trade and Industry and Binh Thuan province last week. 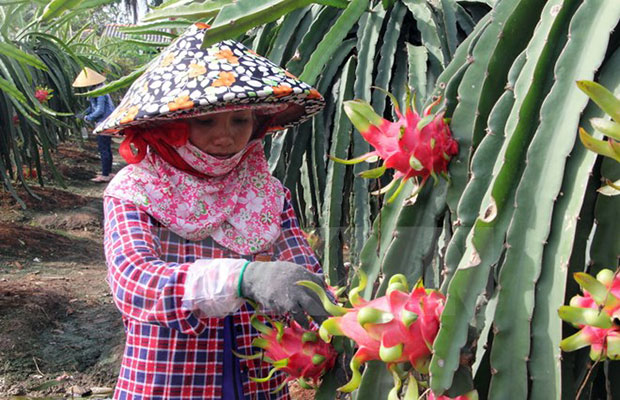 According to figures from the Ministry of Agriculture and Rural Development (MARD), dragon fruit is grown on 37,000ha and the annual output is some 630,000 tonnes.

It is also grown in the provinces of Long An, Tien Giang and Vinh Long, with the area under the fruit being constantly expanded.

MARD estimates that 15-20 percent of the fruit is consumed in the domestic market and 2-3 percent is exported elsewhere with the remaining 80-85 percent traded over the border with Chinese companies.

Do Minh Kinh, Deputy Director of the Binh Thuan Department of Trade and Industry, said there was an overwhelming dependence on the Chinese market, which makes exports of the fruit unstable and risky.

The output in these southern provinces is huge, and with much of their exports heading for China, their trucks are often forced to queue at the border which causes the fruits to spoil and farmers and exporters to suffer losses.

According to Ngo Van Tuan, Director of the Tien Giang province Department of Trade and Industry, the local market is ignored.

Many farmers grow the fruit to VietGAP and GlobalGAP standards for exporting to markets that demand such quality, but these fruits do not fetch higher prices than normal ones, meaning farmers prefer to invest in the latter.

Processors were encouraged to diversify and make other products, she said.

Delegates from the provinces of Binh Thuan, Long An and Tien Giang urged the Ministry of Agriculture and Rural Development to make zoning plans for dragon fruit cultivation around the country, and to draft criteria for using agro-chemicals to improve the quality of the fruit./.