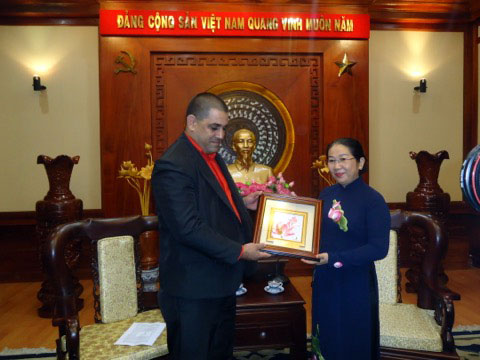 Ronald Hidalgo stated that people and the youth of Cuba always keep in their mind the warm sentiments as well as close accompany that Vietnam gave to their country during the hardest period in Cuba’s history.

He said that Cuban youngsters are willing to work for the reinforcement and promotion of the priceless values of the Cuba-Vietnam traditional relationship that was built with hold-hearted efforts by older generations.

On her part, Dung held that the Vietnam-Cuba ties, founded and nurtured by generations of leaders of both countries, have become a symbol of comradeship and brotherhood between countries.

She affirmed that Vietnamese people always highly value Cuba’s support during the past struggle for independence and the current national construction and development.

She suggested that the youth of both countries should promote the grorious revolutionary traditional and actively engage in the national construction in each country.

She also proposed that Vietnamese and Cuban youngsters should increase exchange and cooperation in the future, thus joining hands in fostering the sound traditional relations between the two countries for peace and prosperity of each nation./.