Tran Quyet Chien finished in second place at the Guri Carom Billiards 3-Cushion World Cup in the Republic of Korea, which ended on September 4. 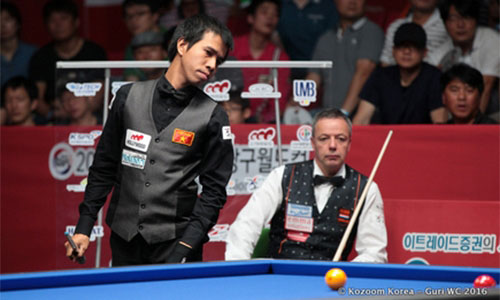 Chien had his most recognised moments during the semi-finals over veteran Dick Jasper of the Netherlands (40-24 in 23).

Jasper has always been an arch-rival to every Vietnamese cueist. Before the semis, the Dutchman believed he would earn a berth in the final match, claiming he has never lost to a Vietnamese player.

“In the recent HCM City World Cup, he defeated four athletes of the hosts in a row. This was the revenge for all the Vietnamese and a catharsis for our billiards,” said Chien, still shaken from his winning performance in the semi-final.

In the Guri final, Chien quickly lost the initiative 15-9 after a run of 10 by Bury in the second inning. Bury improved on his lead after the break, but Chien recovered with a run of nine to make the score 31-27. In the home stretch though, Bury would not be denied.

However, Chien successfully won 40-24 and became one of two finalists, which was the highest result for the country in nine years.

The silver trophy elevated Chien to No 10 in the world and No 1 in Asia, the highest ranking in his career./.