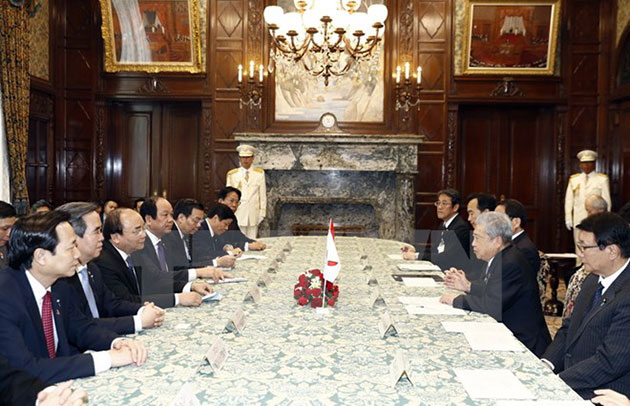 PM Phuc affirmed that the ODA packages have contributed to Vietnam’s socio-economic development.

He stressed the need for the two legislative bodies to promote their role in supervising the Governments’ implementation of signed agreements in order to deepen the bilateral friendship and cooperation.

The Government leader suggested the two sides intensify the sharing of information and experience in legislative work, promote the bridging role of the friendship parliamentarians’ organisations, and strengthen coordination at regional and international parliamentary forums, especially the Asian-Pacific Parliamentary Forum in January 2018.

He showed his hope that the Japanese Diet continues encouraging cooperation in the labour field and between the two countries’ localities while supporting the stance of ASEAN and Vietnam on the East Sea issue.

President Date Chuichi highly valued Vietnam’s economic development in recent years, affirming that he will back the Government’s efforts to foster ties with Vietnam and support the Southeast Asian country’s socio-economic development.

He said he hopes the Vietnamese Government will continue improving its business and investment environment to encourage Japan’s investment in the country.

At the meeting, the two sides also agreed to strengthen cultural cooperation and people-to-people exchanges, especially in 2018 when the two countries celebrate the 45th anniversary of their diplomatic ties.

PM Nguyen Xuan Phuc is in Japan for an official visit and to attend the 23rd International Conference on the Future of Asia./.