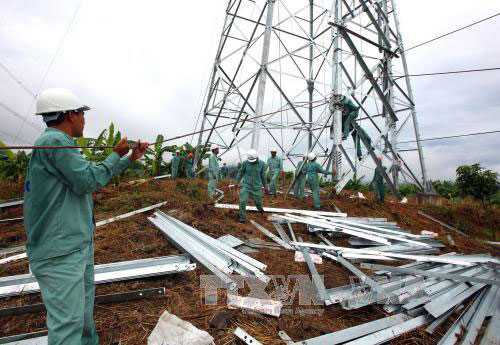 The National Power Transmission Corporation has developed a plan to ensure power supply for the Asia-Pacific Economic Cooperation meetings in Vietnam. (Photo: VNA)

Vietnam will host about 200 APEC events across ten major cities, with the biggest being the APEC week in central Da Nang city in November.

2017 marks the second time Vietnam will host the APEC, following the first in 2006.

The EVN NPT, a member of the Electricity of Vietnam (EVN) Group, said it completed construction of many projects last year in preparation for the international event, including those to improve the capacity of the 500 kV Da Nang, 220kV Hoa Khanh, and 220kV Ngu Hanh Son transformer stations.

The corporation has directed local units to ensure the operation of the transformer stations and transmission lines and provide regular updates on the lines’ status.

The local units were also assigned to intensify management of the transformer stations, especially in Da Nang, and requested to not cut off the electricity in the second and third quarters of 2017.