Vietnam tie UAE in U19 event

Vietnam is on the edge of the Asian Football Confederation U19 Championship’s knock-out round, after their 1-1 draw against the United Arab Emirates in Manama, Bahrain, on October 17. 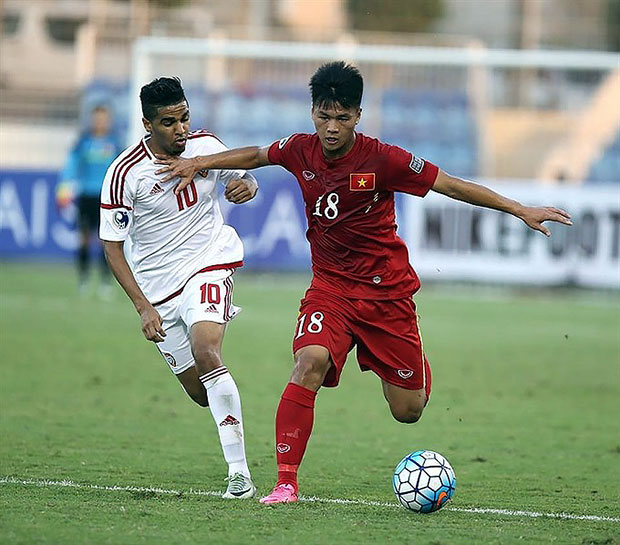 Vietnamese midfielder Duong Van Hao (right) vies for a ball against midfielder Jassim Yaqoob of the UAE during their 1-1 match at the AFC U19 Championship’s Group B on October 17 in Bahrain (Photo: vtc.vn)

The 10-man team successfully tied the former champions in a match at Khalifa Sports City Stadium, and temporarily remains on top of Group B’s ranking, with four points.

Vietnam has never progressed beyond the group stage, while the UAE were champions in 2008. The UAE was stopped in the quarter-final round in the previous year’s tournament.

Prior to the match, coach Hoang Anh Tuan of Vietnam was confident, saying that he had a plan to beat the continental powerhouse rival.

His players did a good job, although the first threatening chance went to the UAE side when captain Ahmed Rahsid broke the Vietnamese off-side trap to attack goalkeeper Bui Tien Dung.

However, his shot from the narrow angle went wide.

Later on, Chinh missed the second chance face to face with Hasan in the box, but he was not able to score his second goal of the tournament.

It was midfielder Ho Minh Di who broke the balance of the game at the 21st minute.

It started from a counter-attack, as Nguyen Quang Hai ran the ball through the left wing and accessed near the box. His outstanding pass found Dĩ in the box, whose strong close tap gave goalkeeper Hasan no chance.

After his assist, Hai had his own opportunity to double the score for Vietnam, but his free kick failed to knock-out Hasan.

The match continued smoothly for the Vietnamese side until the 57th minute, when captain Nguyen Trong Dai received the second yellow card and was sent off after a foul play in the box.

Husain Abdulla easily converted a penalty kick a goal for his side.

The UAE increased their attacks to make use of their advantage in the remaining 33 minutes, however, the Vietnamese defenders gave them no chance for more goals.

In the last group round match, Vietnam will play Iraq on Thursday while, with one point, the UAE, sitting in third position, will play against the People’s Democratic Republic of Korea./.