Vietnam’s U19 football team qualified for the Asian quarter-finals for the first time as they tied 0-0 and shared one point with top-placed Iraq at the final qualifying match in Bahrain on October 20. 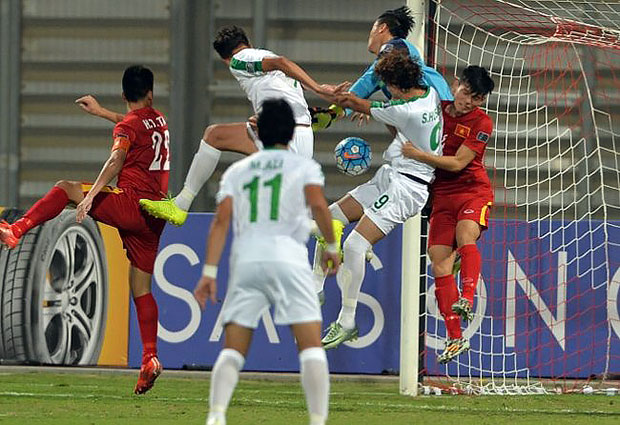 Vietnam’s U19 footballers (in red) play at the match (Source: vietnamnet.vn)

Addressing a press conference after the match, Coach Hoang Anh Tuan expressed his happiness with the result, saying “I’m proud of my disciples. We wrote a new chapter in Vietnam’s football history.”

Also at the match, Vietnamese midfielder Ho Tan Tai was chosen the “best player of the match” by the organising board.

In the qualifying round of the 2016 AFC U19 Championship, Vietnam are in group B which gathered powerhouses the Democratic People’s Republic of Korea, the United Arab Emirates (UAE) and Iraq.

The Vietnam team is scheduled to face with host Bahrain who came first in Group A on October 23 at 23:15 (Vietnam time).

The AFC U19 Championship is organised every two years by the Asian Football Confederation (AFC).

Now in its 39th edition, the U19 Asian Championship is scheduled to run between October 13 and 30, involving a total of 16 teams. Qatar are the reigning champions.

As the RoK qualify automatically as hosts, if they are among the top four teams, the fifth-placed team will also qualify./.