The national dresses, music, wine, flower, symbols, and cuisines are part of the country’s culture that should be soon positioned as “cultural ambassadors” to promote the country’s image to the world. 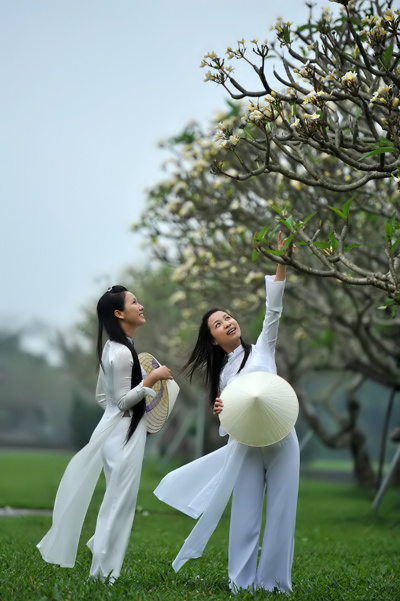 Selection of the national dress alone has led to many discussions. Dr. Pham Quoc Su, from the Ho Chi Minh Museum, said the ao dai (Vietnamese gown) for the 21 state leaders of the 14th APEC Summit in Hanoi in 2006 was just a temporary solution. It was just an ao dai for men, not fully a set of “costumes”.

Previously, the traditional clothes of Vietnamese men in an important occasion were a white shirt, white trousers and a black tunic over the shirt.

The national wine must be the wine of Vietnam that is used in national banquets. Vietnam has many famous brands of wine, but they are made manually. Vietnam has not yet had the national drink like Maotai of China, Sake of Japan or Soju of Korea. It will be disappointing if foreign friends to Vietnam are welcomed by imported wine.

Many have suggested that Vietnam should take Ngoc Lu bronze drum as its symbol. This is a beautiful image that contains many valuable historical, cultural values of Vietnam.

But the bronze drum surface has many complicated details, which the majority of people do not understand. If it is chosen as the national symbol, the details should be streamlined.

Many Vietnamese cuisines are very popular worldwide, such as pho, banh chung or nuoc mam. However, Vietnam has not officially selected them as the national food. Many other dishes like gio lua, nem ran, bun cha, banh mi … are also worthy as “candidates” of “Vietnam’s typical food”.

The national flower is a typical flower symbolizing the spirit and national cultural characteristics of each country. Many countries have national flowers. In 2011, the Ministry of Culture, Sports and Tourism organized the poll of “Vietnam national flower”. The lotus received the highest number of votes (62%) but until now it has not been honored as the national flower.

Recently, the Ministry of Culture, Sports and Tourism introduced “Vietnam’s foreign cultural strategy to 2020, the vision to 2030”. This strategy points out the emphasis on connecting cultural diplomacy with political diplomacy and economic diplomacy, promoting Vietnam’s image…