Vietnam should be ready for bilateral trade deal talks with US: experts

Vietnam should be ready to negotiate a free trade agreement with the US, according to some speakers at a recent seminar on the impacts of the Trump administration’s policies in Asia-Pacific. 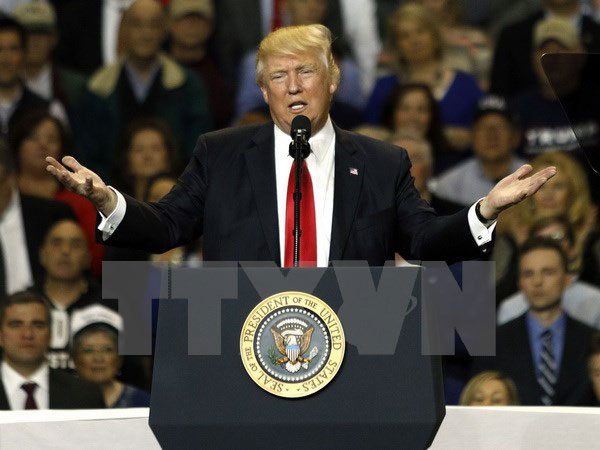 US President Donald Trump speaks at an event in Louisville, Kentucky (Photo: AFP/VNA)

It should watch whether Japan and Australia want to pursue a Trans-Pacific Partnership (TPP) without the US, and be ready to negotiate a free trade deal with the US, similar to what Singapore and the Republic of Korea have done.

Aside from alternatives to the TPP and the US’s new policy on trade with Vietnam, participants delivered speeches on other issues, including the US’s alliances in Asia-Pacific in the new era, the Trump administration’s policy possibilities regarding the East Sea issue, periphery and security partners in Asia-Pacific.

Many delegates stressed that the new administration’s Asia-Pacific policy remains unclear, which has raised concerns among the US’s partners in the region as the world order may change due to competition among powerful countries.

Some speakers said the new administration in the US may neglect Asia-Pacific and return its focus to the Middle East.

This may raise tensions in the region in the East Sea and the East China Sea.

Prof. Ngo Vinh Long from the University of Maine and some other experts suggested small countries prepare long-term strategies in the face of the uncertainty.

Meanwhile, Vietnamese Ambassador to the US Pham Quang Vinh said he hopes that Vietnam-US relations will be reinforced despite the Trump administration resetting its foreign policy priorities./.