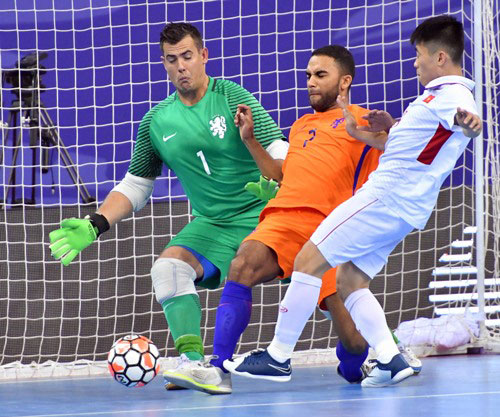 Vietnam controlled the game in the first few minutes. Nguyen Minh Tri opened the score for Vietnam in the 13th minute.

However, just nearly a minute later, Zhang Liang levelled the score for the hosts with a penalty kick.

In the 15th minute, receiving a pass from Liang, Liu Wenxi helped the host lead 2-1.

Two minutes later, Co Tri Kiet levelled the score at 2-2 for the visitors.

Kiet’s goal was a driving force for the visitors who played aggressively in the second half, and Vu Quoc Hung proved himself with a goal early in the half.

In the 27th minute, with a spectacular and skillful kick, Xu Yang helped his team to a 3-3 draw.

In the remaining time of the match, the visitors played with more focus. Quoc Nam fixed the score at 4-3 in favour of Vietnam.

The tournament was held by the Chinese Football Association. It attracted the participation of China, Croatia, the Netherlands and Vietnam.

The event was a warm-up game for Vietnam team to prepare for the AFF Futsal Championship, HDBank Cup 2017, to be held at Phu Tho Gymnasium in HCM City from October 26 to November 3./.