The practice related to the Vietnamese belief in Mother Goddesses of the Three Realms has been officially recognised by UNESCO as an intangible cultural heritage of humanity. 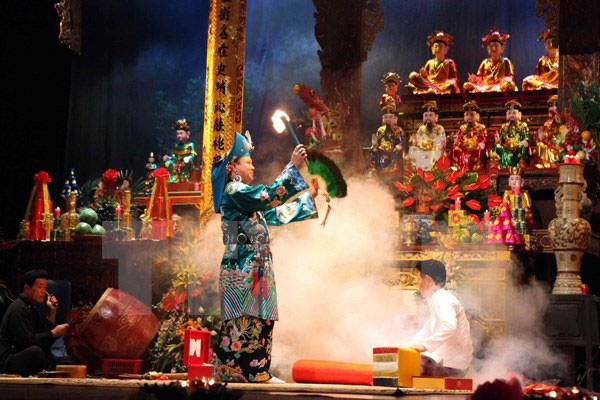 This was announced at the 11th Conference of the Inter-Governmental Committee for the Safeguarding of Intangible Cultural Heritage, which is taking place at Addis Ababa, Ethiopia, from November 28 to December 3.

Vietnam summited the dossier on “the belief of the Mother Goddess of Three Realms worship by Vietnamese” for UNESCO recognition in 2015, but the consideration process was delayed until this year.

Mother Goddess worship is a traditional practice in Vietnam with a long history, having stood the test of social changes.

The practice rituals meet belief-related needs by people in their daily life and have been closely associated with historical and cultural figures, such as Lieu Hanh, Au Co, Vuong Mau (legendary Mother of Saint Giong).

The Beliefs in the Mother Goddesses of Three Realms has been practiced in numerous northern mountainous provinces across the nation since the 16th century.

The practitioners are comprised of temple guardians, ritual priests, spirit mediums, mediums’ assistants, musicians who perform the songs for the spirits, disciples and lay adherents who share the same beliefs in the spiritual power, supernatural strength and protection of the Mother Goddess spirit pantheon.

All of these practitioners form groups who worship together, take part in traditional festivals and perform spirit possession rituals at temples and palaces dedicated to Mother Goddesses.

The folk belief shows the respect of children towards their mothers while reflecting the UNESCO spirit of preserving cultural and religious diversity.