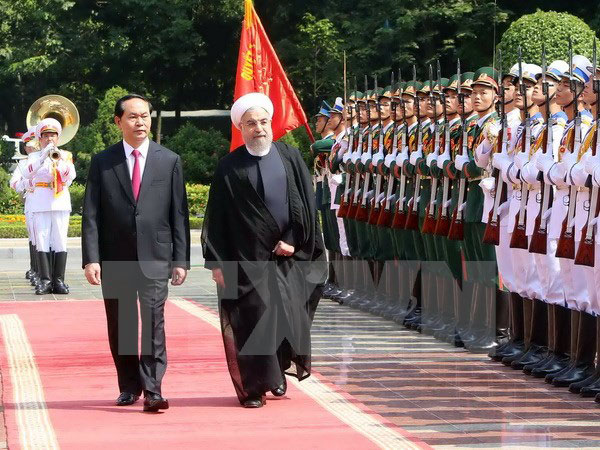 The Vietnamese leader told the media after his talks with President Hassan Rouhani in Hanoi on October 6 that the two sides agreed to uphold their traditional political ties and support each other in pursuing development for their people’s prosperity, and for peace and stability in the region and the world.

President Tran Dai Quang added that he and his Iranian counterpart also discussed security situation in the region and reiterated their efforts to contribute to peace and resolve conflicts on the basis of internationally-recognised universal principles.

He also emphasized that the two sides agreed to consider economic links the foundation to boost their bilateral partnership in other realms.

Host and guest shared the view that opportunities for economic, trade and investment affiliation between the two countries are huge and reciprocal.

However, the scale of cooperation and trade exchange has remained modest.

They, therefore, affirmed their resolve to bring the bilateral trade to over 2 billion USD in the time ahead and create the best possible conditions for both sides’ businesses to cooperate in such areas as energy, information and communications, agriculture, fisheries, science-technology and banking.

Vietnam and Iran will also expand cooperation in culture, education, tourism and people-to-people exchanges, President Tran Dai Quang said, adding that Vietnam will facilitate Iranian goods’ access to the Vietnamese market while applauding President Hassan Rouhani’s support for the import of Vietnamese goods into Iran in order to balance the bilateral trade.

President Hassan Rouhani informed the media that the two sides have reached important consensus on promoting bilateral partnerships in all aspects.

He said Iran is ready to create better conditions for Vietnamese oil and gas firms to expand their presence in the country via implementing existing signed contracts and seeking new business opportunities.

He also underlined Iran’s willingness to work with Vietnam in high-tech industry and new technologies, construction materials, transport infrastructure and thermoelectricity, as well as in agricultural production.

The Iranian President invited his Vietnamese counterpart to visit Iran.

The same day, the two Presidents witnessed the signing of two cooperation documents, one on visa exemption for official passport holders and another being a memorandum of understanding (MoU) on cooperation in information and communications.

President Hassan Rouhani is paying a State-level visit to Vietnam from October 5-7.

He was welcomed with a State ceremony on October 6 morning./.