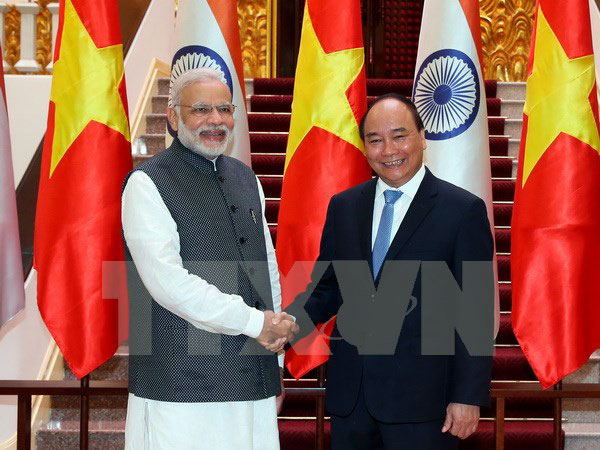 At the talks following the official welcome ceremony, they rejoiced at the extensive and substantive development of bilateral relations, especially since the strategic partnership was set up in 2007.

They said the upgrade of bilateral ties is to meet the aspirations of the two countries’ leaders and peoples, and to be in conformity with both sides’ fundamental and long-term interests, as well as their willingness to contribute to peace, stability, cooperation and development in the region and the world.

He said his country supports India’s “Act East” policy and its greater role in the region and the world.

Narendra Modi, who is the first Indian PM to visit Vietnam in 15 years, congratulated the Southeast Asian nation on the great socio-economic development progress and expressed his pride of the close relationship between President Ho Chi Minh and PM Nehru.

He stressed Vietnam is an important pillar in India’s “Act East” policy and the expansion of India’s relations with ASEAN.

The two leaders agreed to enhance political and diplomatic cooperation through increasing visits at all levels and exchanges between their Parties, parliaments and people.

The countries will effectively implement existing cooperation mechanisms, including soon organising the meeting of the Inter-Governmental Committee.

They considered security-defence cooperation as one of the important pillars of the comprehensive strategic partnership and pledged to effectively carry out the Joint Vision Statement on Vietnam-India Defence Cooperation and deepen collaboration in this sphere.

The leaders agreed to direct ministries and relevant sectors to take concrete measures to help businesses collaborate in the fields of their strengths while reducing trade barriers on import-export products and encouraging bilateral investment.

Prime Minister Narendra Modi welcomed Vietnamese enterprises to participate in the “Make in India” initiative to enjoy its preferential treatment.

He acknowledged the proposal to reduce trade barriers and entrusted ministries and sectors to work on this issue.

Meanwhile, Prime Minister Nguyen Xuan Phuc welcomed Indian companies to increase investments in Vietnam and pledged to create the most favourable conditions for Indian investors and support them based on Vietnam’s current law.

Prime Minister Narendra Modi affirmed that India’s Oil and Natural Gas Corporation (ONGC) will continue to implement its projects in Vietnam, and hope to get more support to expand cooperation and investment in the country.

The two sides exchanged measures to widen collaboration in other important fields such as energy, peaceful uses of nuclear energy, aerospace science, oil and gas, information technology, and science-technology, along with education, healthcare, culture, tourism, and people-to-people exchanges.

They underlined the potential and significance of agricultural cooperation and stressed the need to increase connectivity in aviation, navigation, infrastructure and digital connection.

The PMs also exchanged views on regional and international issues of mutual concerns and agreed to enhance coordination at regional and global forums, especially of the Association of Southeast Asian Nations (ASEAN) and related forums.

Regarding the East Sea issue, the two sides reiterated their wish and determination to work together to maintain peace, stability, security, freedom and safety of overflight and navigation in the East Sea based on the principles of international law, particularly the United Nations Convention on the Law of the Sea 1982 (UNCLOS).

They confirmed the importance of fully respecting the Declaration on the Conduct of Parties in the East Sea (DOC) and hoped the involved parties will soon reach a Code of Conduct in the East Sea (COC).

The Indian PM expressed his hope that Vietnam and other ASEAN member states will soon reach an agreement to realise the 1-billion-USD credit package that India provides for the bloc in digital and infrastructure connectivity.

He took this occasion to thank the Vietnamese Government and people for their warm welcome and invite Prime Minister Nguyen Xuan Phuc to visit India at a convenient time.

Dates for the visit will be arranged through diplomatic channels.

After the talks, the two PMs witnessed the signing of 12 cooperation agreements between the two countries./.