The fourth meeting of the Vietnam – Germany Strategic Management Group was held in Hanoi on October 12. 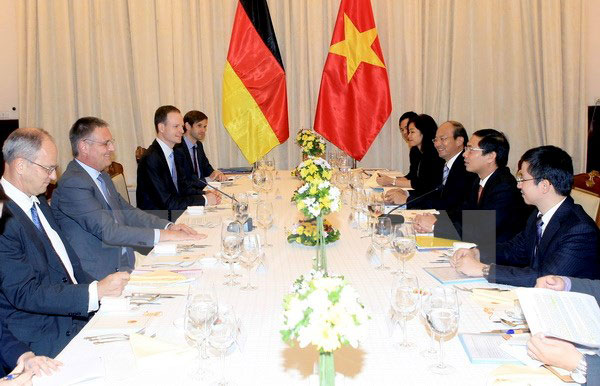 At the meeting (Photo: VNA)

The two sides reviewed the two countries’ cooperation under their strategic partnership framework.

They agreed that the Vietnam – Germany strategic action plan in 2015-2016 has progressed well, particularly the German House project in Ho Chi Minh City .

The officials also agreed on measures to implement upcoming projects between Vietnam and Germany, especially in the fields such as politics, trade-investment, education-training, science-technology and judicial and legal affairs.

Deputy Foreign Minister Bui Thanh Son said he hopes the two nations will boost connectivity and support the business community in the respective markets while maximising opportunities from the free trade agreement between Vietnam and the European Union (EU).

Secretary of State Markus Ederer suggested the Vietnam – Germany University strengthen coordination under the dialogue programme between the two countries in 2015-2018.

The two diplomats agreed to push the signing of the Vietnam-EU Free Trade Agreement.

The German side pledged to support Vietnam to enhance relations with the EU, implement the Vietnam-EU Framework Agreement on Comprehensive Partnership and Cooperation, and persuade the union to recognise Vietnam’s market economy status.

Both nations committed to increasing cooperation and mutual support at multilateral forums, especially at the United Nations, the Asia-Europe Meeting, and the ASEAN-EU cooperation framework.

They also discussed regional and international issues of mutual concern, including navigation and aviation safety and security in the East Sea.

Germany affirmed its support to the settlement of disputes via peaceful means and international law, particularly the 1982 United Nations Convention on the Law of the Sea./.