Vietnam came from behind to trounced the Democratic People’s Republic of Korea (DPRK) 5-2 in a friendly match on October 6 in Ho Chi Minh City. 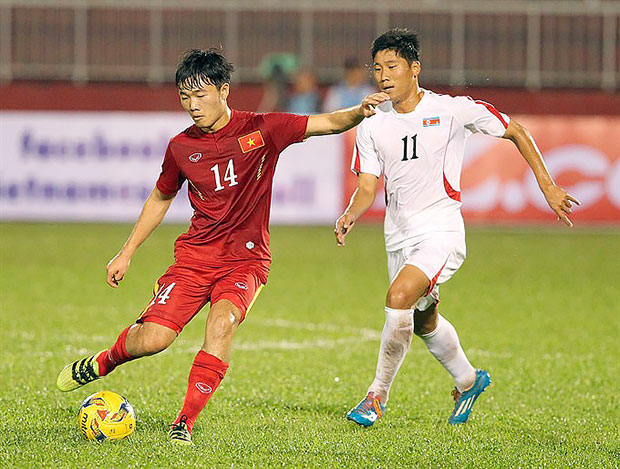 The win was a big surprise, since Vietnam, world No 141, are 13 steps lower than their rivals, who brought their best players, some of them having competed in Europe, to Thong Nhat Stadium.

Pak Kwang Ryong made a double for the visitors at the 15th and 53rd minutes of the games.

The Vietnamese goals were then sandwiched in-between.

The visitors set up their domination in the first minutes.

The Koreans needed five passes to break the Vietnamese defence.

The ball was given to Pak, whose light tap-in defeated goalkeeper Tran Nguyen Manh to push his team ahead.

However, it seemed that it was not the DPRK’s peak day.

The hosts caught the pace of the game and leveled the result at the 32nd mark.

Receiving a ball from captain Le Cong Vinh, Nguyen Tuan Anh danced in the box against two Korean defenders, before he made a curving finish to the left corner of keeper Ri Myong Guk.

Vinh then lifted Vietnam, who started the second half with rapid speed at the 51st.

Nguyen Van Toan stole the ball from the DPRK side and sent it to Vinh, who sprinted to the box and defeated Ri for the second time.

Pak brought the game to a tie score just one minute later.

Jong In Gwan then heeled the ball to Pak, who was not being watched by any Vietnamese, to make an accurate finish.

However, that was all they could do this game, although both sides opened consecutive attacks for more goals.

Midfielder Luong Xuan Truong made a smart pass to Vu Van Thanh, who chested and volleyed to the net.

Truong completed his perfect day with a goal for himself with a long banana-shaped finish from outside of the box at the 85th minute.

Midfielder Pham Thanh Luong, who took the captain band from Vinh, made Vietnam fly high with the fifth goal in the additional time.

It was the first time Vietnam beat the DPRK in their five matches.

In their previous match last year, the two teams ended 1-1.

The win is a good start for coach Nguyen Huu Thang and his players, who are to take part in the ASEAN Football Federation Cup next month./.