Vietnam defeated East Timor 4-0 in a match of the AFC U23 Championship qualification, which was played under heavy rains in HCM City on July 19. 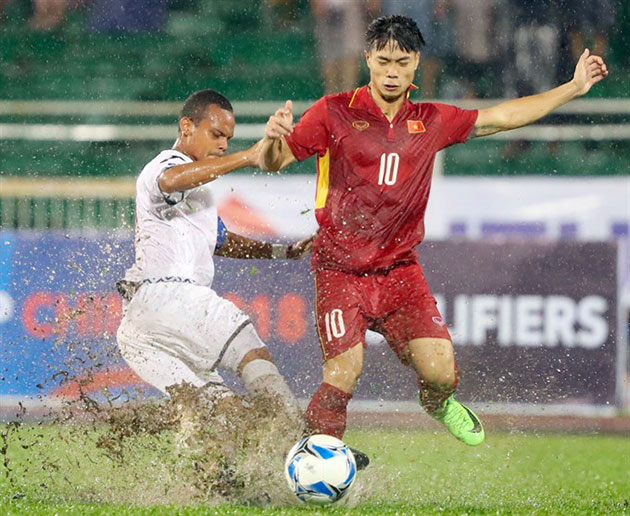 Nguyen Cong Phuong of Vietnam (right) vies for a ball against an East Timor player during their AFC U23 Championship qualification in HCM City on July 19 (Photo: VNA)

The rain left giant puddles in the Thong Nhat Stadium creating difficulties for both sides. It also saved Vietnam from a goal just four minutes into the game.

Monteiro received a ball from his teammate and tapped it to the far corner of the net. Vietnamese goalkeeper Bui Tien Dung failed to stop it but a puddle did his job just a metre in front of the white line.

Vietnam then fought back immediately. They strongly pressured East Timor and found the opener at the 18th minute.

Striker Ha Duc Chinh got his first goal in an official match for the national team when he capitalised on a mistake by the East Timor defenders.

In the second half, Vietnam started to play with more ease as the weather conditions improved and striker Nguyen Cong Phuong struck twice at the 67th and 71st marks.

It was 4-0 for the hosts as midfielder Nguyen Tuan Anh hit home from 20m to round off a good start for Vietnam.

Also the same day, the Republic of Korea showed off their power with a huge 10-0 win over Macau in an earlier match of Group I.

Cho Young-ook netted four goals, Park Seong-bu made it a double while Hwang In-beom, Doo Hyeon-seok, Jo Sung-wook and Park Jae-woo netted one each for the team.

The RoK were placed on top after the first round. The title favourite will next play East Timor on July 21.

Coach Jeong Jeong-yong said he was satisfied with the win although things must be improved.

“I am satisfied with the result and the performance of our players today. Our players showed their good spirit and tried to score many goals. We played better in the second half, especially while attacking,” Jeong said on the-afc.com.

“Although we scored 10 goals in this game, I still think that we lost many chances to score more goals. That is why I want our players to show their best performance in the rest of the matches, especially in making use of scoring chances,” he said.

He also said he would test his players in the second match against East Timor to have the best line-up for the Vietnam match.

Macau, in the meantime, will face the hosts.

Speaking with reporters after the match, Macau coach Tam Lao San said he was a little disappointed with the result even though his players did well but they could not compare with the Koreans.

Macau suffered heavy pressure in the game and made mistakes.

The RoK took advantage of these mistakes and scored goals.

He said the Macau team has several amateur players with the majority between the ages of 19 and 20 and some older players who have other jobs.

Despite a weak team, they would do their best to showcase the spirit of football against Vietnam, he added.

Two years ago Macau lost 0-7 to Vietnam at the U23 qualification./.