The Vietnam Olympic football team produced a dream start to their campaign at the 17th Asian Games (Asiad) in Incheon, the Republic of Korea (RoK), as they beat out their Iranian counterparts by a shocking score of 4-1 on September 15.

The Asiad opener had been expected to be a hard-fought encounter for the Vietnamese squad, coached by Japanese Toshiya Miura, against one of this year’s title favourites, Iran, who was 2002 champion, 2006 bronze medalist and 2010 fourth-place finisher. 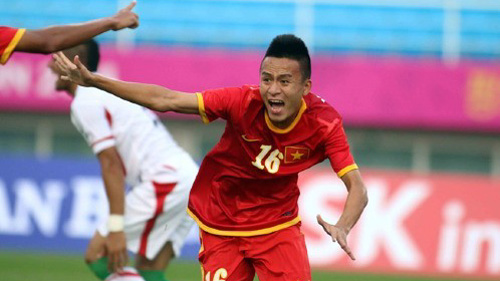 However, the Vietnamese men went far beyond expectations as they performed overwhelmingly well throughout the game.

Vietnamese striker, Mac Hong Quan, had a sparkling day, delivering a convenient right-wing pass in the 24th minute to enable Huy Toan to open the scoring for the red-colour team before making it 2-0 himself with an excellent personal showing six minutes later.

After the break, Mosalman rekindled Iran’s hopes at resurgence by pulling back a goal from the penalty spot in the 66th minute.

However, Mosalman’s effort proved too little to save the Iran Olympic team from a gloomy start to their Asiad campaign as Phi Son and Hoang Thinh added two more goals in the 69th and 81st minutes respectively, and sealed a commanding 4-1 victory for the Vietnamese.

Next up for Vietnam is an encounter against theKyrgyzstan Olympic team on September 22.

The Asiad men’s football event features 29 participating teams, competing in eight groups. The teams will battle it out in a round robin tournament to decide the top two scorers from each group to advance into the round of 16. Vietnam is placed in Group H along with Iran and Kyrgyzstan./.