A Vietnamese delegation led by Deputy Minister of Agriculture and Rural Development Ha Cong Tuan attended the ongoing 39 th session of the FAO Conference in Rome, Italy along with 193 delegates from member nations of the UN Food and Agriculture Organisation (FAO). 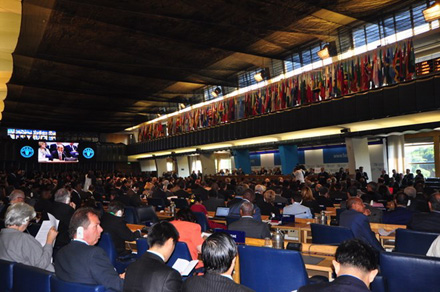 These will require policy makers to adopt a basic rights-based approach at key summits on development finance, greenhouse gas emissions and the UN new goals later this year, he added.

Deputy Minister Tuan said Vietnam will be responsibly engaged in FAO poverty reduction programmes  and the nation is ready to share its experience with international friends in this regard, adding that the meeting showed FAO’s and its member nations’ determination to promote poverty reduction

The meeting reviews the implementation of the UN millennium development goals (MDGs), while focusing on FAO’s future development plans and its budget for activities in the next two years.

This year’s meeting focused on issues related to global food security, agriculture and the food market, as well as the implementation of MDGs and the FAO’s organisational structure.

During the session, FAO also honoured countries that have reached their MDGs and gained considerable poverty reduction achievements, including Vietnam.

Jose Graziano da Silva from Brazil was re-elected as FAO Director General for the 2015-2019 tenure.