The on-going National Assembly session has focused on measures to boost socio-economic development in 2015 and the coming years. While the economy is rebounding, sustainable growth is set as the ultimate goal.

In the National Socio-economic Development Strategy from 2011-2020, Vietnam is determined to comprehensively accelerate the reform process with 3 strategic breakthroughs in finalizing the market economy institution, developing high-quality human resources, and modernizing the infrastructure to turn Vietnam into an industrial nation by 2020.

This year Vietnam is hoping for a GDP growth rate of 6.2%, a 10% increase in export revenue, and approximately 1.6 million new jobs.

A government report on socio-economic development last year and in the early months of this year showed some positive changes and prospects for economic growth. Last year Vietnam managed to stabilize the macro-economy, contain inflation, and ensure social security. 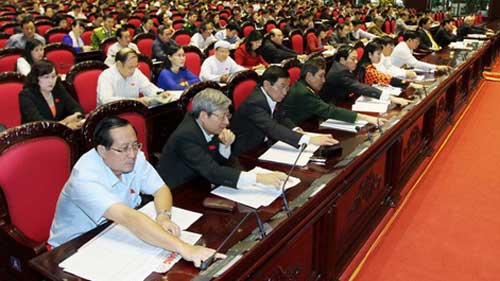 Vietnam obtained 13 of the 14 set targets. Last year’s GDP growth rate was 5.98% and the CPI was kept at 1.84%, the lowest level in several years. Export surplus reached US$2.1 billion.Tran Hoang Ngan, a NA deputy for Ho Chi Minh city, said, “Economic growth has continued and inflation has reduced for 4 consecutive years. Investment efficiency has improved. Economic restructuring, particularly banking restructuring, has obtained certain results and bad debts have been well managed.But the Vietnamese economy has faced several difficulties including the quality of economic growth and the recurrence of import surplus after 3 years of export surplus, which have affected monetary and foreign exchange policies. Budget overspending has pushed public debts to an alarming level.”

Several NA deputies have suggested corporate measures be taken to achieve sustainable development. They said a long-term measure is to reform the growth model in association with economic reform, particularly in public investment and state-owned enterprises.

The private economic sector, especially small-and medium-sized enterprises should be prioritized as momentum for the national economy. The NA asked the government to resolve difficulties for enterprises, focusing on quality, effectiveness, and competitiveness.

Bui Quang Vinh, Minister of Planning and Investment and a deputy for Lai Chau province, said besides measures to attract foreign investment, the government should continue to contain inflation at the current rate of 5%.

“We have to maintain the macro-inflation rate while ensuring economic growth. The government’s projection of inflation from 5 to 7% is reasonable. If it’s lower, it will prevent growth. We loosen monetary and credit policies to encourage investment and give businesses better conditions to borrow capital,” Vinh noted.

The NA has identified fine-tuning mechanisms and policies an urgent task to spur growth.

Deputy Head of Ho Chi Minh City’s National Assembly Deputy Delegation Tran Du Lich said, “It’s necessary to review all policies and laws to create a level playing field for all enterprises. In the context of globalization the biggest challenge to enterprises is competition for survival and growth.”

“Socio-economic development towards sustainability is Vietnam’s strategic goal,” he added.