US Ambassador to Vietnam Ted Osius highly valued Can Tho City’s competitive edge at a June 8 working session with the city leaders.

During the meeting, Can Tho leaders introduced the city’s potential and strength, emphasising that Can Tho is the hub of the Mekong Delta region.

The city leaders have paid due attention to fostering cooperative ties with the US, particularly setting up sister relations with Riverside City, California.

Ambassador Ted Osius in turn said with a favourable geographic position and great agricultural potential, and existing infrastructure projects like Can Tho airport and seaports, the city has attracted much foreign and domestic investment capital. 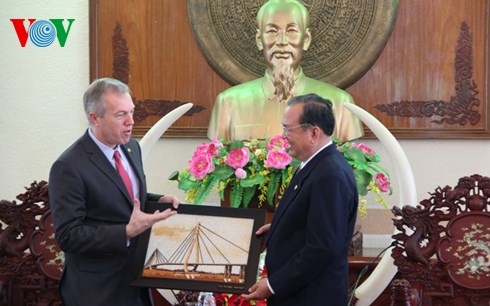 US businesses have also sought opportunities to cooperate with Vietnamese localities, including Can Tho, he said.

The US ambassador added that if negotiations on trans-Pacific Partnership (TPP) agreement are successful, the agreement will help spur Vietnam’s economy, especially the Mekong Delta region.

Education cooperation is a pillar in Vietnam-US bilateral cooperation agreement, he confirmed.

To mark the 20th anniversary of diplomatic ties, on the same day, Ted and his accompanies visited Can Tho University and talked with students there.