U16 Vietnam beat U16 Malaysia at AFF event

Vietnam made a good start at the ASEAN Football Federation U16 Championship when they beat Malaysia 3-0 in the Group A opener in Phnom Penh, Cambodia on July 10. 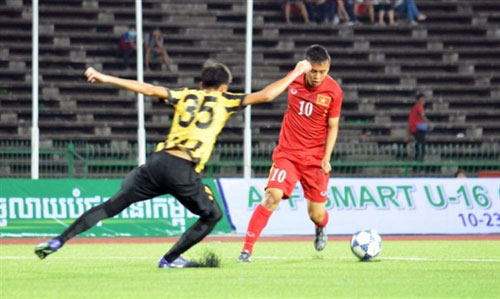 Nguyen Khac Khiem of Vietnam (right) scores a goal in his team 3-0 win over Malaysia in the ASEAN Football Federation U16 Championship 2016. (Photo: aseanfootball.org)

The win allowed the team to lead the group at the National Olympic Stadium.

Vietnam’s robust start saw Nguyen Khac Khiem delivering the lead after just six minutes, with a drive from inside the box.

The hapless Malaysian defence was punished yet again in the 68th minute via Nguyen Trong Long before Nguyen Huu Thang finished things off deep in injury time.

The group also saw Singapore defeating the Philippines 3-1 to take the second spot.

In the other match, played across town at the Army Stadium, Australia were lucky to escape with a 1-1 draw against a gritty Myanmar side.

Vietnam will next face Australia on July 12./.