Typhoon Sarika passed Luzon Island of the Philippines and entered the East Sea on October 16 morning, becoming the seventh storm to hit this waters in 2016. 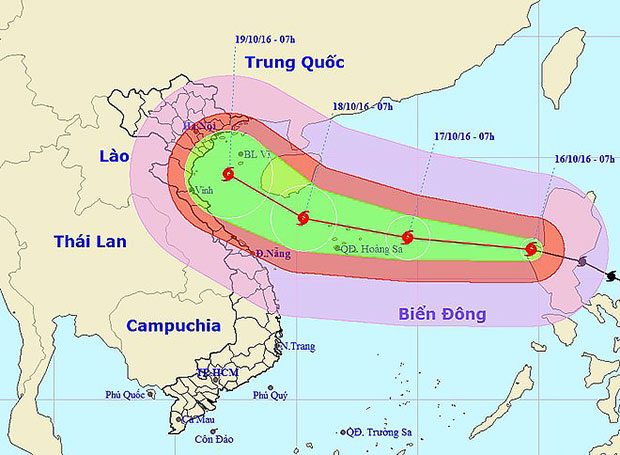 At 8am of the day, the centre of Sarika was on the western coast of Luzon Island with the strongest winds in the eyewall of 150-165km per hour, according to the National Centre for Hydro-Meteorological Forecasting.

In the next 24 hours, the storm is predicted to move west-northwest and then westwards at a speed of 20-25km per hour.

At 7am of October 17, its eye is expected at about 16.7 degrees north latitude and 114.6 degrees east longitude, about 250km east of Hoang Sa (Paracel) archipelago. Sarika can keep sustaining winds of up to 150-165km per hour.

The dangerous area at that time, with wind speeds of between 39km and 49km per hour, will be in the north of the 14 th parallel north and in the east of the 112 th meridian east.

In the following 24-48 hours, the typhoon is likely to move west-northwest at 15-20km per hour.

At 7am of October 18, it will have its eye at around 17.5 degrees north latitude and 110.3 degrees east longitude, on the northwest of Hoang Sa.

Extremely rough seas are forecast for the northern area of the East Sea, including the area of Hoang Sa archipelago./.