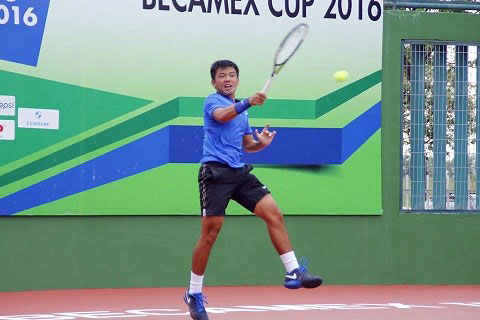 The top Vietnamese player, who ranked 952 in the world, defeated Japanese Masato Shiga, world No 631, 6-4, 6-2 to earn his first-ever good medal in a professional tournament, sponsored by the International Tennis Federation.

The first set saw both players take care every point.

The turning point came in the 10th game when Nam stole a break point to grab the set win.

The second set seemed easier for the Vietnamese, who received strong support from local fans and was visibly excited after taking his lead.

The victory also earns him 1,400 USD and an 18 point bonus to enter the top 700 on the world list, which will be released on September 26.

Earlier, Nam, in a pair with Nguyen Hoang Thien, triumphed in the men’s double category.

It was also their first career ITF Men’s Futures doubles.

Nam and Thien received bonuses in cash and 18 points, raising them to enter the top 1,000./.