Long Bien Bridge was designed by world renowned engineer Gustave Eiffel, who was also the designer of the famous Eiffel Tower in Paris. It was constructed between 1899 and 1902 and first opened to traffic in 1903. At the time it was then the only bridge spanning the Red River connecting Hanoi and Haiphong port city. 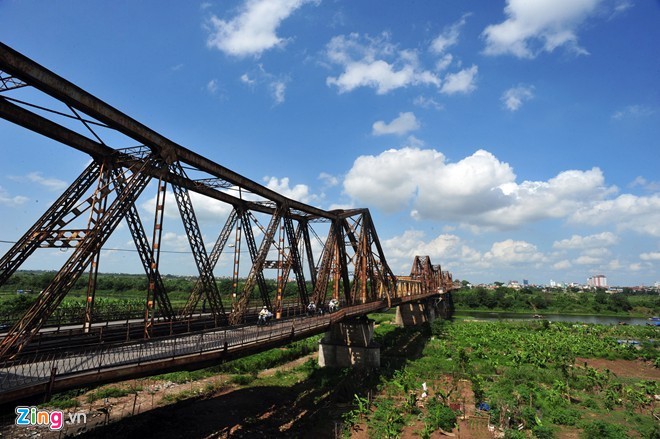 The 116-year-old bridge spans three centuries and is considered an important and central part of Hanoi’s development and history.

The steel structure witnessed the withdrawal of French troops from Hanoi and welcomed Vietnamese soldiers to liberate the capital in 1954. It was also severely damaged by fierce American bombardments during wartime.

The bridge partly opened to traffic in September 2009 after the construction of key parts completed, helping ease traffic jam in Chuong Duong bridge and connecting roads. 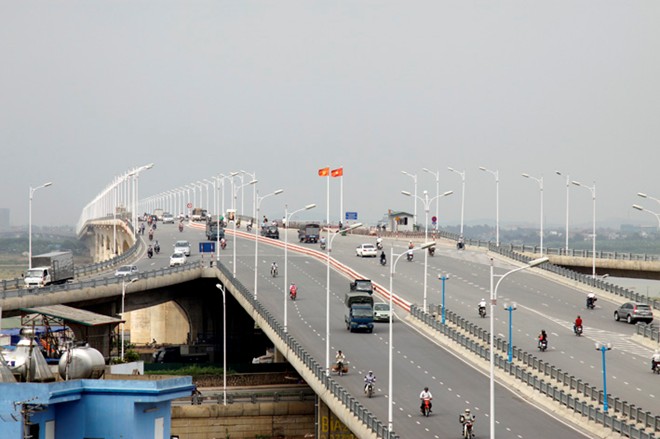 As one of the seven bridges spanning over the Red River in the master plan of the capital city by 2020, Vinh Tuy bridge has been recognised as a high-quality project to celebrate the 1,000 th anniversary of Thang Long-Hanoi.

The bridge is 15 kilometres long with 3.7 km-river-spanning section.

Pa Uon bridge, located in the northern mountainous province of Son La, has the main pillar of 98.6m high, the highest one in the country and Southeast Asia. 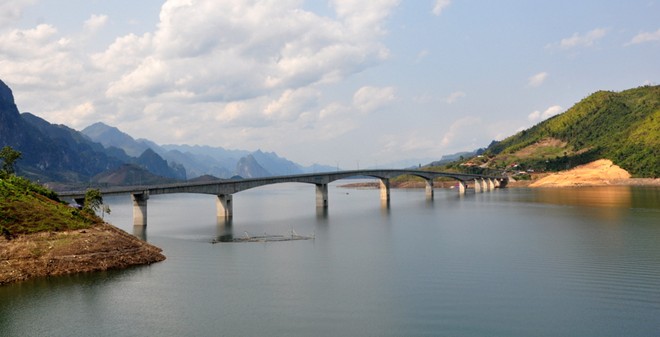 The bridge is put into operation in August 2010. 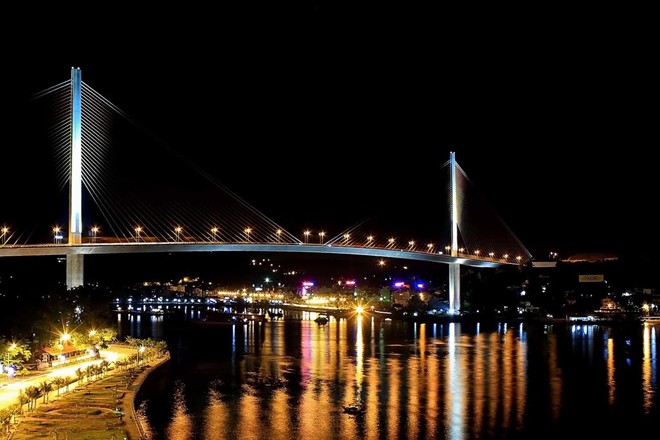 Spanning the Cua Luc Straits in Ha Long City and connecting Bai Chay with Hon Gai, the bridge facilitates traffic on National Highway No. 18, which links Ha Long City and Hanoi, and is expected to boost the economy of not only Quang Ninh but also the northern port city of Haiphong and Hanoi.

Cau Rong (Dragon) Bridge on the Han River in Danang features 166 metres of undulating steel in the shape of a giant fire-breathing dragon flying towards the East Sea.

The main span of the 37.5m-wide bridge is bookended by two 128m side sections, with the dragon’s head and tail on each end of them. The whole structure weighs 8,164 tonnes and stretches 666m in length. 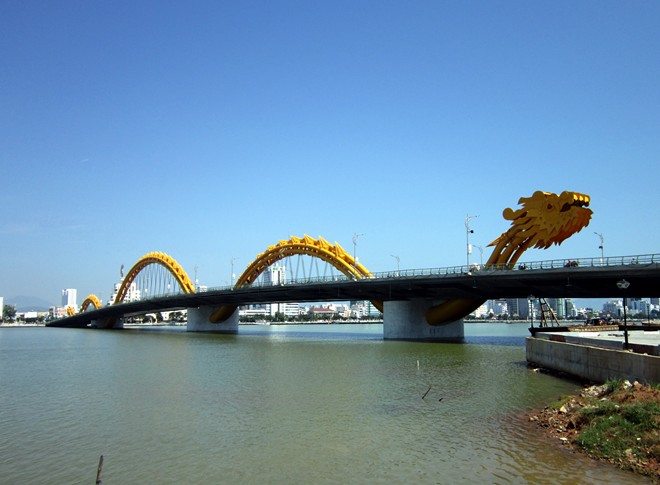 With unique aesthetic and creative characteristics, the bridge won the Diamond Award in the 2014 Engineering Excellence Awards (EEA) in the structural systems category.

After opening to traffic in March 2013, the Dragon Bridge has become one of Danang’s symbols and key tourist attractions.

Thuan Phuoc Bridge, the longest cable-stayed bridge in Vietnam, includes four lanes, a main span of 650 meters and two approaches of 600 meters each. 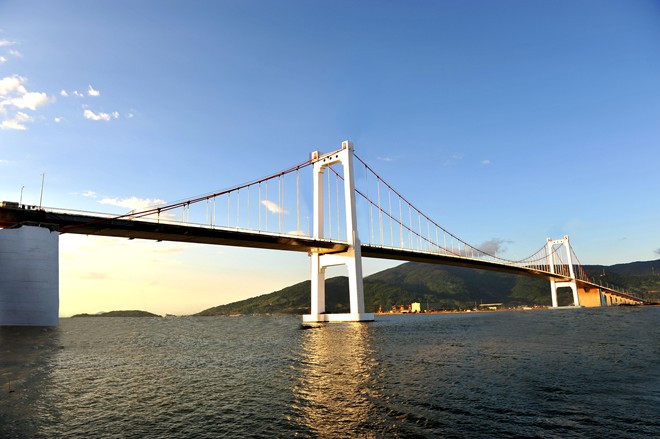 The bridge was constructed with a total invested capitalisation of VND1 trillion.

It ensures 27 meters of clearance for vessels on the river below and safety in strong storms and floods. 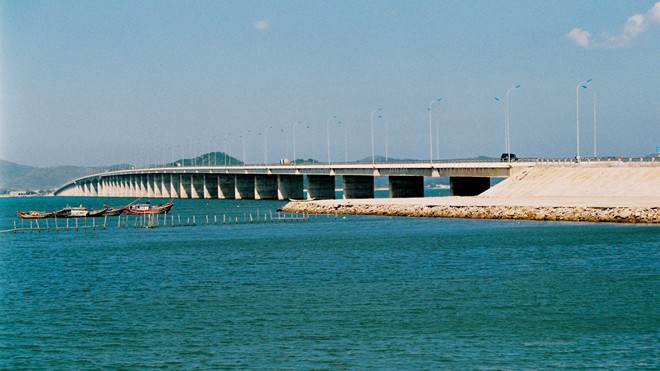 Nestled amidst the mystical beauty of Thi Nai Lagoon and Phuong Mai Peninsula, Thi Nai Bridge links the city of Qui Nhon to Nhon Hoi Economic Zone. It is not solely for transportation purpose but serves as an enticing tourist spot in Binh Dinh province.

Phu My is the largest cable-stayed bridge in Ho Chi Minh City, linking District 2 and District 7 with a capacity of 100,000 vehicles per day. 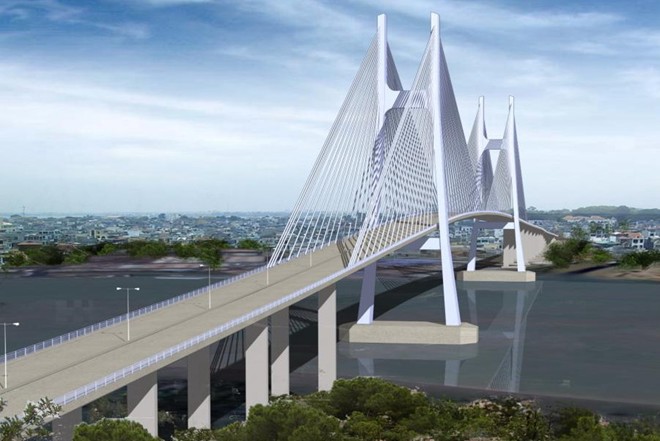 The cable-stayed part over the Saigon River is 705 m long (380 m main span) and 27.5 m wide, supporting six traffic lanes: two in each direction for motor-vehicles, one for motorbikes and bicycles and a 1,5 m-wide pavement for pedestrians.

It has total investment capitalisation of VND2.076 billion.

My Thuan is a cable-stayed bridge over the Mekong river, connecting Cai Be District of Tien Giang province with Vinh Long City in Vinh Long province. 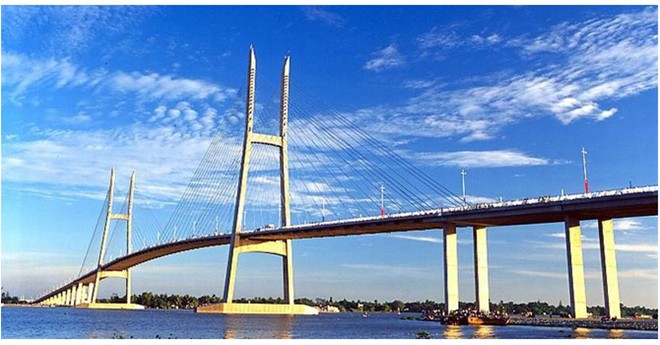 It was developed in a joint venture between the governments of Australia and Vietnam. The bridge was the largest overseas assistance project undertaken by the Australian government costing AUD1 million.

It was built by Bilfinger Berger and completed in 2000.

Can Tho Bridge (Can Tho City)

Can Tho is a cable-stayed bridge over the Hau (Bassac) River – the largest distributary of the Mekong River in the southern city of Can Tho. The bridge has six lanes measuring 23m in width, with 4 lanes for traffic and two for pedestrians. 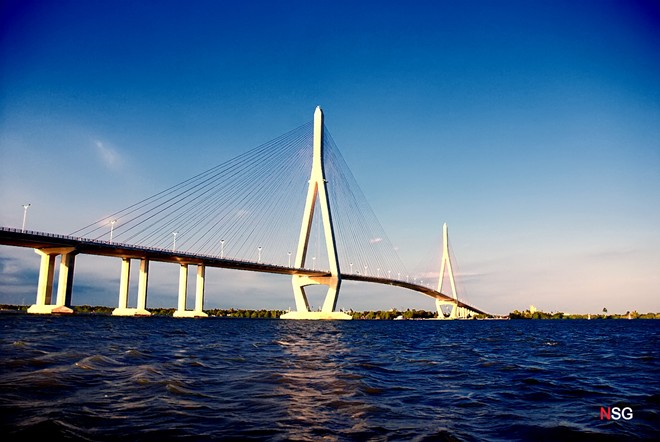 Inaugurated in 2010, Can Tho Bridge is the longest main span (550m) bridge in Southeast Asia, with construction cost of VND4.842 trillion (roughly US$342.6 million), making it the most expensive bridge in Vietnam.

The conference on developing and perfecting institutions opened