The Vietnam News Agency (VNA) has selected the top ten domestic events for 2014 as follows: 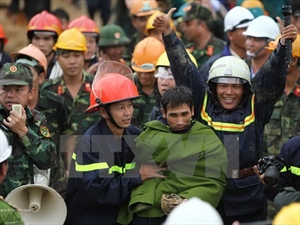 1. Resolutely protesting illegal acts of China in the East Sea: On May 2, China illegally placed its drilling rig Haiyang Shiyou 981 in Vietnam’s exclusive economic zone and continental shelf, seriously violating international law, running counter to the high-level agreements between the two countries, and threatening peace, security, safety and freedom of navigation in the East Sea. With the international community’s support, the entire Party, army and people of Vietnam were unanimous in strongly protesting the illegal acts of China and resolutely safeguarding the national sacred sea and island sovereignty by peaceful means.
2. Promulgating a number of important laws: In 2014, the National Assembly approved 29 laws in order to improve economic institutions, the State apparatus and administrative and judicial reforms, ensure human rights and citizens’ fundamental obligations, and accelerate international integration. Additionally, lawmakers conducted votes of confidence on key officials in the State system elected or approved by the National Assembly. They passed a resolution verifying the results of the confidence vote.

3. Economic growth surpasses the set target: amidst global economic difficulties, Vietnam ’s gross domestic product (GDP) in 2014 is estimated to expand by 5.98 percent over the previous year, exceeding the target of 5.8 percent set by the National Assembly. The average consumer price index (CPI) shows a year-on-year rise of 4.09 percent. The export turnover is estimated at 150 billion USD, up 13.6 percent from a year ago. However, the State budget overspending remains high while difficulties in solving public debts and bad debts still lie ahead.

5. Policies on education-training renovation: Implementing the resolution of the 8th Party Central Committee on the basic and comprehensive education and training renovation, a number of policies were adopted such as the organisation of the 2015 national high school exam and renovation of circular and textbooks since the 2018-2019 academic year.

7. Successful rescue of victims of hydropower plant tunnel collapse in Lam Dong province: At 4:30pm on December 19, 12 workers were rescued from a collapsed tunnel of the Da Dang-Da Chomo hydropower plant in Pang Tieng hamlet, Lat commune, Lac Duong district, the Central Highland province of Lam Dong, after being trapped for 81 hours.

8. Numerous strides made in economic integration: In 2014, Vietnam concluded negotiations on bilateral free trade agreements (FTA) with the Republic of Korea and the Customs Union of Russia-Belarus-Kazakhstan and reached a consensus on orientations for finishing FTA talks with the European Union. Additionally, the country also took part in negotiations on three regional FTAs, namely the Regional Comprehensive Economic Partnership (RCEP) agreement, the Trans-Pacific Partnership (TPP) agreement, and another deal with the European Free Trade Association (EFTA).

10. Three more heritage honoured: The Trang An Landscape Complex in the northern province of Ninh Binh was recognised as a world heritage meeting both cultural and natural criteria by UNESCO, thus becoming the first mixed heritage in Vietnam . Vi-Giam folk singing of the central provinces of Nghe An and Ha Tinh was listed as part of the intangible cultural heritage of humanity. Meanwhile, a collection of official administrative documents of the Nguyen Dynasty was named as documentary heritage of the Memory of the World Programme in Asia-Pacific.-VNA.