The Celebration on the 71st August Revolution, National Day and Presentation of Party Membership Badges 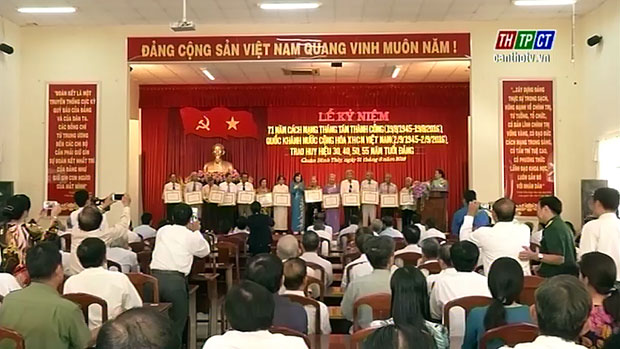 The Celebration on the 71st August Revolution, National Day and Presentation of Party Membership Badges.

In the solemn atmosphere, delegates together recalled the nation’s traditions in the August Revolution and the National Day.

Under the leadership of the Party and beloved uncle Hồ, our people have struggled to win back power, fully eradiated the feudalism and on September 2nd at Ba Đình square, president Hồ Chí Minh read the Independence declaration to found the Democratic People’s Republic of Việt Nam.

Empowered by the state president, permanent member of the city Party committee – Head of the Publicity-Education Board under the city Party Committee Trần Việt Trường presented the 3rd Class Public Order to senior lieutenant-general Phạm Ngọc Hưng and secretary of Bình Thủy urban district party committee Lê Hoàng Nam handled the Army decoration for lieutenant- colonel Phạm Ngọc Dũng who has served in the armed force for 25 years in a row.

The gathering in celebration of Chol Chnam Thmay festival 2021