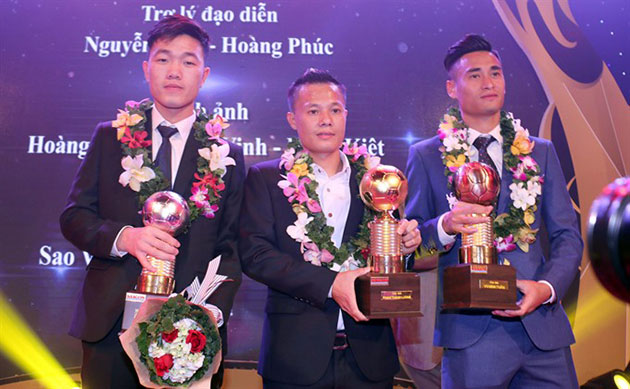 Luong, a former member of the national team, who also plays for Hanoi FC, beat four nominees in the category to take the title at the award ceremony held in HCM City.

Truong scored a double, with fans voting him the most favourite player of 2016.

“I want to thank the leaders of the Vietnam Football Federation, Hanoi FC, my teammates and all fans who strongly supported me in practicing and competing during the whole year. I promise to contribute my best to national football,” Luong said in his acceptance speech.

Luong had a highly successful year in 2016. He was one of key players for Hanoi FC as they won the V.League title.

His club also came in second at the National Cup.

The 28-year-old and his team played in the Super National Cup against Quang Ninh Coal and lost the game narrowly in a penalty shoot-out.

He was a regular member of the national team before he announced his retirement last month after Vietnam’s failure at the ASEAN Football Federation (AFF) Cup.

Luong was groomed at a training centre in Hanoi.

He was called to the national team in 2008, the year when Vietnam won their only AFF Cup thus far.

He played 72 matches and scored six goals for the national team.

The Golden Ball for the female players went to Huynh Nhu of the HCM City team.

For the first time, organisers honoured futsal players this year.

With their outstanding performance in both local championships and at the national level, the Thai Son Nam Club dominated the game.

In other categories, Gaston Merlo of SHB. Da Nang was voted the best foreign player of the year.

The striker could not take part in the ceremony yesterday because he is injured.

This will probably be the last year that the Argentinean player can vie for the title.

He has recently granted Vietnamese citizenship. His Vietnamese name is Do Merlo.